Investing In Thailand Aquaponics: The Future Of Farming 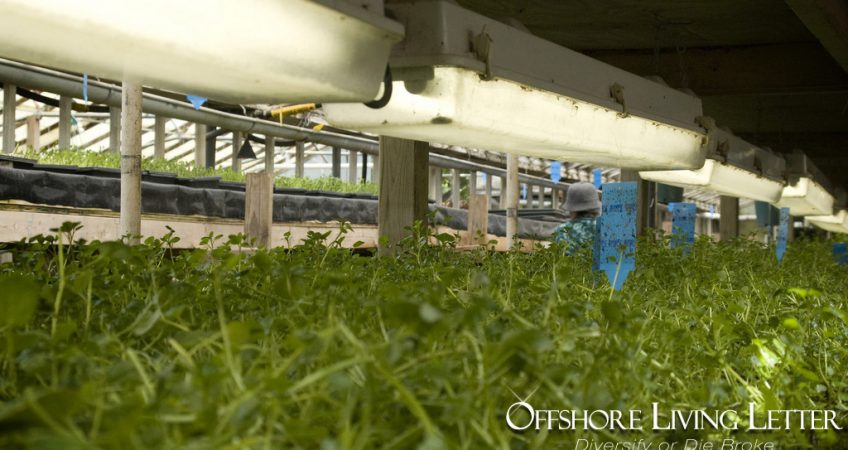 For my own portfolio, I’ve long focused on rental income. A rental property can be a great cash flow generator.

Over the last several years, I’ve expanded my thinking about options for earning rental income to include agricultural properties.

Like a beach house or condo, these can generate reliable passive income long-term.

Meaning a turnkey agricultural project where a management company takes care of growing the crops and then sends you your rent each year in the form of a percentage of the cash from the sale of harvests is a great addition to any real estate portfolio.

The key is the crop… not how it’s grown.

That is, dirt isn’t necessarily required.

You can also grow food using an aquaponics system… and, in today’s world, you can own the growing system and let someone else manage its production for you.

Aquaponics is a fast-growing industry. Hobbyists are growing vegetables in small systems in their garages and on their back porches.

The key for a commercial aquaponics operation is to produce a high-value crop with a ready market… and the key to that is working with an experienced aquaponics farmer.

Like the one I’ve spent the past year getting to know in Thailand.

I’ve held off introducing you to this group until I’d carried out full due diligence… which I’ve now done.

More on this operation and the opportunity it presents for you in a minute.

First, a little more about aquaponics…

It’s defined as the combination of hydroponics (growing produce in water rather than dirt) and aqua culture (farming fish in ponds). The basic premise is that the waste from the fish provides the nutrients for the produce.

Aquaponics uses less than 1/10th the water of traditional farming, and, thanks to no chemical pesticides and fertilizers, it is easy to keep the production organic.

It also requires no arable land. You can use land with low productive value to house your aquaponics systems, leaving more arable land for traditional crops.

This is an extremely sustainable and green food production system and an important part of the answer to how we humans continue to feed ourselves in the face of ever-increasing global population and reduced availability of arable land.

The group I’ve identified in Thailand is focused right now on the production of lettuce and tilapia. These are quick and easy to grow and to sell. Once the full farm has been established, they intend to diversify production to include higher-margin herbs and to test different fish options.

In fact, they are already testing catfish in their model greenhouse.

The principals have put together a local team that includes university professors as well as an aquaponics expert. They have completed the installation of their first full-sized greenhouse and have begun construction of two more.

The first harvest from the model greenhouse has been completed and sold.

One big benefit of an aquaponics system for the owner is that it begins producing cash flow quickly.

Lettuce can be harvested every three weeks, more or less. With some fine tuning, that can be reduced by several days. The fish have a growth cycle of six months. That means you can have two fish harvests and at least 17 lettuce harvests a year.

It takes several months to install an aquaponics system, including shipping of the components, construction, and testing of the pumps after they’ve been attached to the fish tanks. Call it three months to be safe.

Once the system is up and running, revenues are distributed every six months, to coincide with fish harvests. That means you start getting a return on your capital in about nine months from when you buy a system.

Breaking Down The Investment

As an investor, you’re buying the aquaponics system and contract with the farm management company to operate it for you.

They grow the produce, sell it, and send you your share of net revenues as rental income for your system. It works just like a farm rental where you as the land owner get a share of the revenue from farm production.

The system is yours, so you can sell it, move it to another farm manager, or even have it shipped to your home and use it yourself.

Of course, if the projections hold up, you’ll be happy to leave the system where it is to keep the cash flowing.

Risks involved with an aquaponics operation are similar to those associated with any kind of farming. Most important among them are weather and pests.

In this case, you have market, country, and currency risks, as well.

Weather risks are mitigated when farming with aquaponics because you reap multiple harvests in a year, rather than the one or two of conventional farming. If weather interferes with one crop, your average annual production may decrease, but you aren’t likely to lose every crop during any given year.

Use of greenhouses mitigates risk both from weather and from pests.

Each greenhouse is an enclosed environment. It’s covered with mesh to allow air and sunlight in, but the mesh helps keep birds and insects away from the produce. Regular inspections keep the farm management team on top of any pest threat that does manage to make it into a greenhouse from spreading.

More important, in this case, are the market risks.

Initial harvests of the produce and fish are being sold locally in Thailand.

Thailand has a population of more than 67 million people. That’s a lot of people to feed, and traditional growing methods aren’t keeping up with the demands of a growing middle class and international travelers who want higher quality produce.

However, Thailand is centrally located, making it a prime market for export to Singapore, China, and the Middle East, all of which have their own food production woes. Exporting higher value produce for a premium price to these markets could improve revenues, but, more importantly, expands and diversifies the universe of potential buyers.

One reason this aquaponics farm has been located where it’s been located is the international airport in Chiang Mai. This means direct and easy transportation to export markets.

What about the stability of Thailand?

Country risk here can be overstated.

Thailand has a history of military coups and is currently under the control of a military junta. Elections are scheduled for 2017. But the country continues to function under military rule.

That’s not to say that things can’t and don’t get interesting. However, historically, situations of unrest are brought under control quickly, and the King has helped to maintain calm on the ground. The new King should play a similar role.

While country risk for Thailand isn’t zero, it’s also not as high as some think.

Currency risk is a factor for produce sold in Thailand. Exports may be sold in U.S. dollars or the local currency of the importing country. For now, focus on the Thai baht risk.

It seems reasonable to expect, as many do, the dollar to weaken (or the baht to strengthen, depending how you look at it) from its current position. However, if the baht weakens, returns could fall, as they are based on an exchange rate of 36 baht to US$1.

As exchange rates aren’t predictable long-term and the projections for this project extend over 20 years, it’s impossible to say how much currency risk could be a factor.

I don’t think there’s much risk to the developer over those three years, but it’s a nice guarantee for the investor.

Two other risks to consider are to do with the project and with the farm management.

As I’ve mentioned, the developer has installed the infrastructure necessary for the project, including wells and storage tanks, as well as the model greenhouse and the first production greenhouse. The second and third greenhouses are in process; the second is under construction and components for the third are on their way to Chiang Mai.

The first production cycle has been completed in the model greenhouse and that produce has been sold for a slightly higher price than in the projections.

The first fish are growing nicely.

While this project is still in the early stages, the progress to date is impressive. As I said, I’ve held off presenting the opportunity to you until it reached the stage it’s reached.

On the farm management side, the challenge is balancing growth of the fish with growth of the produce. If you have too many fish creating fertilizer, your produce won’t like it. Too few nutrients and growth won’t be as rapid as it could be.

The aquaponics expert on the management team comes with the required experience and has been managing various agricultural operations in Thailand for decades, including for large international seed companies. He knows how to grow things especially in an aquaponics environment and is also overseeing the greenhouse infrastructure to ensure the best possible growing environment.

It’s his job to oversee the farm operation to make sure the systems produce the volumes expected.

The other big challenge is confirming buyers for the harvests.

Three local buyers have committed to buy all the production from the first greenhouse. Meanwhile, the developer continues to negotiate with a long list of potential buyers who are interested in production as more comes online.

The buyers are there. It’s a matter now of ramping up production.

I rate both farm management and produce sales risks as limited.

The specific opportunity I’m bringing to your attention is to own a fully operational aquaponics system.

Specs include 1,080 grow holes, a 3,500-liter fiberglass fish tank, and a biofiltration system and nutrient tank… along with all the required stands, pumps, valves, and tubes. The purchase price of US$31,000 includes delivery and setup as well as access to the on-site infrastructure (greenhouses, water systems, etc.).

Once you own the system, you then contract with the management company to grow your produce and fish.

Of, if you wanted to try this yourself, you could have the system shipped to your home. However, the shipping cost would kill you. If the idea of becoming a hands-on aquaponics farmer interests you, better to buy a system closer to home.

The manufacturer rates the systems for 20 years. Over that lifetime, the IRR projection is 15.17%. The projected annual yields on the initial purchase price range from 10.49% in the first year to 35% by year 20 thanks to inflation and production improvements.

Again, one big benefit of this kind of farming is the quick cash flow generated. Grow cycles are counted in weeks rather than months or years.

While produce will start being sold within a few weeks of your system being installed, the farm management group will time payouts with the fish harvests, which are twice a year. Tack on the three-month setup time for delivery and installation, and you can expect your first cash payout in nine months with further payouts every six months thereafter.

For more information on this opportunity to become an aquaponics farm owner, get in touch here.