Investing In Beachfront And City Real Estate In Ecuador 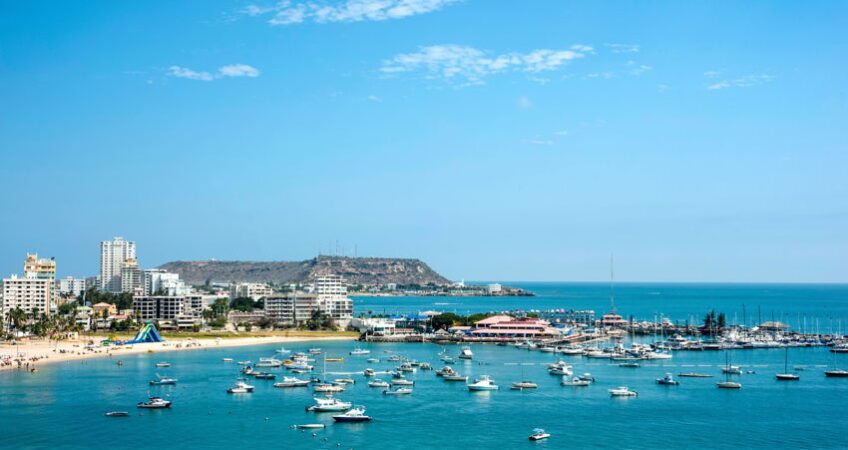 Latin Beauties And A Police Shoot-out

I traveled to Ecuador for the first time in 1999.

I landed in Guayaquil late at night and went straight to the hotel and to bed.

The next morning, stepping into the hotel elevator for the ride down to the restaurant for breakfast, I found myself surrounded by five or six extremely tall and extremely beautiful women.

I had to wonder if I was in the right country. Aren’t Ecuadorians descendants of the Incas, I wondered to myself? That is, aren’t they all short? Who were these six-foot beauties?

The elevator doors opened into the lobby, and I was greeted by dozens more tall, gorgeous women. I wasn’t sure what was going on, but I wasn’t complaining either.

It turned out that some Miss Latin America pageant was being held in the hotel. Unfortunately, I was leaving after breakfast with my guide and driver to see what the southern coast of Ecuador had to offer. Still, the country had managed to make a nice first impression.

While waiting for my guide, I dragged myself from the lobby and the beauty pageant girls to take a look around Guayaquil. Stepping out onto the sidewalk in front of the hotel, the hairs on the back of my neck stood up.

That has never happened to me before or since, and I’ve been places most people wouldn’t go without an armed guard. My reaction to Guayaquil was instinctive. I sensed danger, but I didn’t have time to figure out what that danger could have been. My driver arrived.

I’ve been back to Guayaquil since and didn’t have as strong a negative reaction. Still, this isn’t a city I’d spend time in, given a choice.

Back in 1999, my driver and guide took me first west to Salinas, a coastal resort area where the well-to-do from Guayaquil escape for weekends and holidays. The weekday I was there, the place seemed a dreary ghost town. I could tell, though, that Salinas must get crowds at least sometimes, given the number of restaurants and night clubs.

My main objective that trip was to scout real estate investment opportunities. I was hoping to find a great beach where oceanfront property was on offer super cheap. Salinas was cheap, but I wasn’t impressed by the beach or the town, so, after lunch, we moved on up the coast.

The coastal road was in bad shape. La Niña (or El Niño, I can’t remember which) had hit Ecuador hard, and the rain and ensuing flooding had done a number on the roads and bridges. In some places, temporary bridges had been installed by the U.S. military.

None of that deterred my guide. He drove those roads like he was in a Formula One car in Monte Carlo. Granted, we had a lot of miles to cover, and the guy was making this trip as a favor to a friend of mine.

As we sped up the coast, getting my new friend to stop to take a look at any property we passed along the way was a challenge. Eventually, I persuaded him to take some time in a small town so we could see what might be for sale and get an idea of pricing. He had told me that 10 cents a square meter should be the going rate for beachfront, but that seemed too cheap to me. To put things in perspective, productive land in the mountains at the time was going for 50 cents a meter or more. I wanted to speak with someone actually trying to sell his beachfront property to confirm my driver’s estimate.

As it turned out, my guide was in the ball park. Beachfront property along the coast of Ecuador at that time was as dirt cheap as he had represented. Some beachfront property (that is, land directly along the water’s edge) we stopped to ask about was being farmed to grow watermelons. Yes, that’s right. The land that would be considered the most valuable most anywhere in the world was being used to raise watermelons.

What I came to understand that trip was that the money in Ecuador was in the Andes. No one valued the beach areas because the land wasn’t as agriculturally productive. This has changed a bit in the two decades since, but it’s something to bear in mind as you shop for property here.

The watermelon farmer I spoke with on that first visit quoted me (not surprisingly) gringo prices, but even the inflated prices he represented were downright cheap compared with the price of beachfront property anywhere else in the world I was familiar with.

Bidding our watermelon-farming friend “hasta luego,” we were back on the washed-out highway heading north.

Next stop was Manta, a large port city where some expats had, even back then, begun to settle. Manta had the shopping and access that expats wanted, whereas the other towns we’d passed along the coast from Salinas were all more rustic and more remote.

The big deal in Manta at the time was the rumor that a U.S. naval base was coming to the city. That rumor was driving speculation that real estate prices would boom. The base did come but has since left. Real estate prices have increased in Manta over the last 20 years, but I wouldn’t say that this area experienced a boom.

However, Manta stands out in memory from that first trip to Ecuador because it’s where I had the one and only real live police chase of my life.

As we pulled up to a stop light in the center of town, I noticed a taxi cab pulled off to the side of the road just next to us. Two cops got out of the cab and, without a word of introduction or explanation, climbed quickly into the back of our SUV. They started chattering to my guide in rapid Spanish, and, when the light changed, he took off quickly, with the two cops now in back as our passengers.

My Spanish was much more limited back then, and I wasn’t able to follow the conversation. My driver explained that the cops were after some guys who had just robbed a convenience store… and the taxi they had commandeered for the chase had broken down.

They wanted my guy to catch up to the robbers and had instructed him to speed his way through traffic.

As we neared the car with the suspects, the cops took off their hats (so as not to be noticed) and drew their pistols.

Up to that point, I was enjoying the excitement, but, having grown up around guns and law enforcement friends in the United States, I started to wonder how well trained in gun safety these Ecuadorian cops were. I didn’t want us to hit a bump and accidentally get shot in the back of the head.

When we caught up to the suspects, the cops lowered themselves in the back seat and told my guide to pass the suspects’ car. Shortly after passing them, we came upon a truck broken down in the right lane of a four-lane road. The head policeman had my guide pull up next to the broken-down truck and stop. The cops hopped out and drew down on the robbers.

Unfortunately, there was enough room for their tiny car to fit between our SUV and the truck, so they only slowed down, drove through, and then sped off again as the cops continued to fire their .38s at them.

Then the cops hopped back in, and we were on the chase once more.

When the robbers turned off into a residential subdivision with dirt roads, my guide had had enough and slowed down enough to lose the suspects. After a minute or so of looking for them again, the police officers had us take them back to the main road, where they got out. They said they’d hitchhike back to their station.

The experience livened up an otherwise uneventful real estate scouting trip. It also, though, more to a point, highlighted the serious lack of infrastructure in this country at that time. The cops didn’t have a vehicle to call their own.

Ecuador was (and is) a poor country. The cost of living was and remains extremely low, as are real estate prices in most regions. That’s what has attracted expats and retirees to this country in ever-greater numbers for the last 25 years.

They come for the cheap prices, but they stay for the beautiful mountains and the colonial cities, especially Cuenca, where you can, legitimately, enjoy a cosmopolitan life on a very small budget.

I’ve been to Ecuador dozens of times over the past 20 years, but that first visit stands out for all the characters I encountered, from Miss Venezuela, Miss Colombia, and Miss Peru to watermelon farmers on the beach and cops who packed pistols but had to commandeer the vehicles of strangers at random to pursue bad guys.

I can’t promise that your time in Ecuador will be similarly memorable, but I can and do continue to direct your attention to this country if you’re looking for bargain-priced real estate or a good life on a small budget.