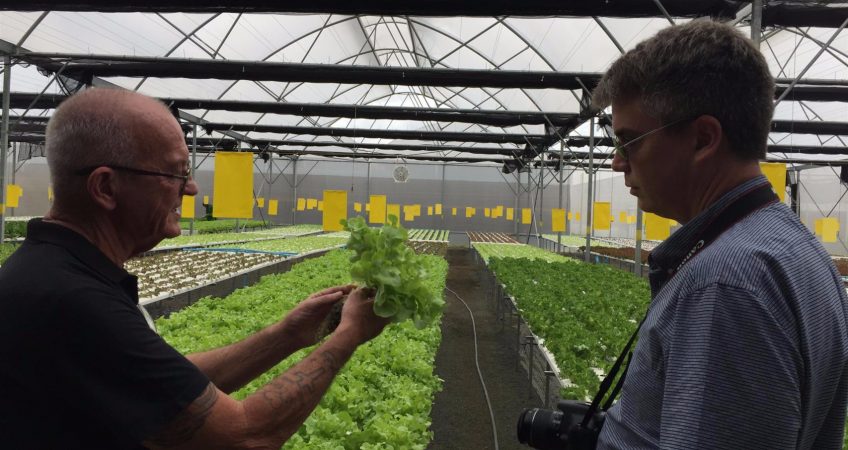 Earn Up To 14.5% Quick-Flowing Cash From This Now Proven Investment

Two years ago I made a quick trip from France to Thailand to visit with a developer embarking on a new agricultural opportunity that piqued my interest.

The developer Andrew was launching an aquaponics/hydroponics project to grow lettuce and fish to sell into the local Thai market… with an eye to expanding the operation over time to grow enough to export regionally—to China and Singapore—where his harvests could yield higher margins.

Earlier this week I returned to Thailand to see in person the progress since my first visit. Andrew has kept me and all investors updated along the way, sending pictures of greenhouses as they were being constructed and of lettuce crops being harvested. However, I wanted to see the farm operations in person to get a better idea of the advancements made.

I wasn’t disappointed. The photos I’ve seen have been impressive, but walking through the active greenhouses gives you the real picture.

In the R&D greenhouse, Andrew is testing new varieties of lettuce and herbs.

In addition, he has installed tanks to test the production of crayfish.

“Why crayfish?” I asked.

Because, Andrew explained, they have lower death rates and lower running costs than the tilapia fish he has been farming. Plus, crayfish are hot in this part of the world, on menus from Bangkok to Shanghai, and can command a better price than tilapia.

All of this research and testing benefits both the developer and his investors. The end goal of the R&D is straightforward—to generate more revenue from each aquaponics and hydroponics system by producing higher-margin products.

That’s thanks to one key benefit of aquaponics over traditional dirt farming—crops grow quickly… meaning it’s not long from the construction of a greenhouse and the installation of the aquaponics and hydroponics systems until crops turn over and cash begins to flow.

Walking through the greenhouses, Andrew explained that everything we saw growing—thousands of heads of lettuce—was already sold.

During my first visit two years ago, one of my biggest questions for Andrew was to do with who he imagined would be buying his harvests. He explained that he was speaking with a number of potential buyers… but everyone was telling him to get back in touch when he actually had something to sell.

Not ideal… still, I sized up the risk of not selling the production as small.

Lettuce production in Thailand is limited due to the weather and the traditional farming techniques employed by the locals. Limited supply coupled with growing local demand (from both grocery stores and hotels and restaurants enjoying fast-growing demand from their guests… especially their ever-greater volumes of Chinese guests) convinced me Andrew would have no problem selling his end product.

Turns out to have been a well-placed bet. Andrew is turning away potential customers and advising would-be buyers that they need to pre-order to guarantee access to his increasingly sought-after lettuce.

In fact, the pre-ordering works in the buyer’s favor, as growth cycles of Andrew’s various lettuces are short enough that Andrew is able to customize production according to demand… and to adjust harvest focus quickly.

The only thing keeping Andrew from selling more lettuce is the number of greenhouses operating.

Your Chance To Profit

That’s where you can come in. You can own your own system and tap into the infrastructure—both physical and operational—that the developer has put in place over the last two years.

In addition to erecting nine production greenhouses, two R&D greenhouses, an education center, and worker housing Andrew has replaced the single-phase electricity from the main road with three-phase electricity so the water pumps and other equipment can operate more efficiently. And he’s installed a small cold room where he can store lettuce during harvest days until it’s shipped to or picked up by the buyer.

Operationally, fully trained and specialized staff is now in place. One team places the seeds in the germination mediums. Another checks the lettuce in the systems each day for any problems with bugs, growth rates, or taste quality. The nutrient systems are automated, and the electronic gauges for these are checked twice a day. In addition, Andrew’s team carries out a physical check each morning to confirm the readings on the gauges.

As an investor in an aquaponics/hydroponics system today, you benefit from the extensive work, learning, and training already invested in to get this point. From here expansion is a matter of “copy/paste.”

Except that the developer isn’t simply copying and pasting. He’s constantly improving.

That investment buys you two racks of tubes with a total of 1,320 grow holes, water pumps, nutrient tanks, and the fish tank. You also get the benefit of the now in place electricity and greenhouse infrastructure.

The projected yields start at 10% a year once production starts… expanding over time to generate a projected 20-year IRR of more than 14.5%.

And, in fact, these projections are from the launch of the operation two years ago… meaning they don’t reflect the higher revenues expected from the specialty lettuces and the crayfish that Andrew is ready to begin growing as part of the next round of systems.

The sooner your system is up and running, the quicker you can begin receiving your income.

Of course, many more details are available. To speak with someone about this opportunity, get in touch here.