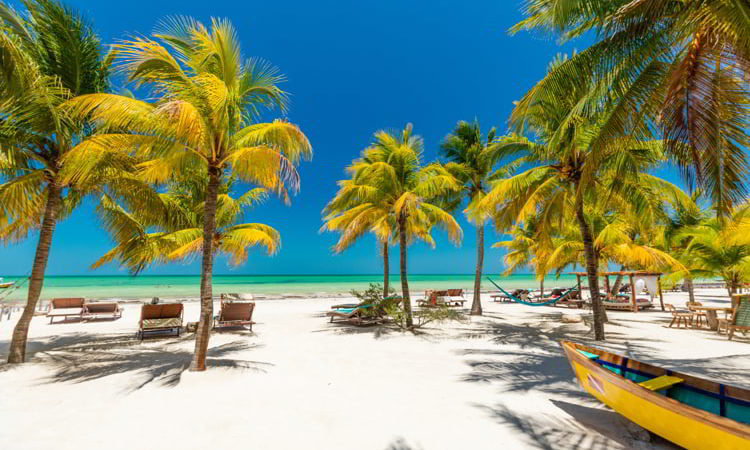 Our Dollar Discount Is At Risk

Meantime, some long-time favorable rates—that had been continually improving for almost 10 years—are beginning to turn against us.

Managing the movement of money in foreign currencies is a key factor when investing in real estate overseas. Unless you’re buying in a market that trades in your home currency, exchange rates will affect your purchase price, your rental income, your cost of living while there, how you pay for maintenance and ongoing expenses, and your profits upon exit.

Failing to pay attention to exchange rates in markets where you invest can cost you a bundle.

Take the Mexican peso, for example. In recent years, it’s been trading in a narrow band, generally between 19 and 21 pesos per US$1.

That’s pretty stable. But even within that narrow band, the exchange-rate impact can be significant.

In the case of a luxury beachfront condo valued at 7 million pesos, for example, that small 2-peso spread can cost you more than US$35,000…

The Long View And The Recent Turnaround

Looking back over the past several years, buyers with U.S. dollars have accrued a lot of buying power. Properties in some markets are heavily discounted, thanks to favorable exchange rates.

The superstars have been Brazil, Colombia, and peso-priced properties in Mexico (where properties can also trade in dollars).

The most important takeaway here is that, even factoring in the recent changes, these three countries still stand out as bargain markets for dollar holders. 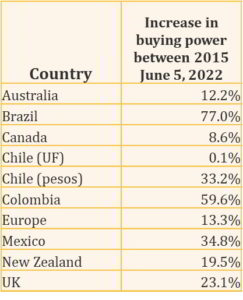 The result has been dramatic. Today, you could buy:

If you’ve done any shopping for real estate in the United States lately, you’ll recognize these as world-class bargains.

But things are changing.

Let’s look at what’s happened to exchange rates just since the start of this year. In the chart below, the “Gain or Loss” column refers to the dollar-holder’s buying power… 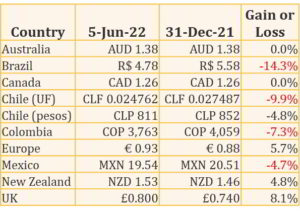 Why are these currencies reversing direction?

Lief Simon and I have been talking about this currency shift since it began. And, while neither of us claims to be a currency expert or a predictor of the future, two things jumped out:

Brazil, Mexico, and Colombia (whose currencies have gained on the dollar) are energy producers, so they benefit from high oil prices and are unlikely to feel the negative impact of Russia’s oil sanctions.

Chile—while not a major oil producer—is a commodity-rich country that gets almost all its petroleum from its neighbors in South America.

Europe and the U.K. (where the dollar has gained strength) may be affected by the rise in U.S. interest rates, with two rate hikes completed by the Fed and two more on the horizon by July. This may be attracting euros looking to escape Europe’s near-0%interest rates to dollar markets.

If you’re interested in buying in Europe, now is the time to jump into action.

Currently, the Fed expects to raise interest rates two more times, at their June and July meetings. If this is causing a flow from euros to dollars, I’d expect a peak in late July. Some experts are predicting a euro-recovery during the second half of 2022.

If you’re looking in Brazil, Colombia, or Mexico, don’t procrastinate. You still have a very strong advantage, despite what’s happened since the start of the year.

But the trend is running against us in Latin America, and there’s no way to predict when it will change.

Remember these guidelines when preparing for and when managing an investment across currencies:

How To Become Currency Independent

For income investors, it’s possible to achieve currency independence abroad. This is when you have a property that’s self-sustaining in a foreign currency, eliminating the need to move money into the country on a regular basis.

In Colombia, my properties were priced in pesos… the rental income was in pesos… and my living expenses, maintenance costs, and taxes were in pesos.

After the initial purchase the exchange rate didn’t matter anymore. The property income paid expenses, and there was no need to move money.

Lief Simon cites his European rental properties as another example of this currency independence.

In the big-picture context of diversifying your portfolio to include properties in other countries and other currencies, this is a worthwhile endgame.

colombia countries with favorable exchange rates exchange rates favorable exchange rates Invest In Real Estate Latin America mexico real estate
Share:
Offshore Living Letter ® 2022
Legal Sitemap Privacy Policy
* Type a keyword then press Enter
We use cookies to ensure that we give you the best experience on our website. If you continue to use this site, you're agreeing to our policies.Thanks, I Accept!Privacy policy