How I Learned Diversifying Overseas Was Key To Success 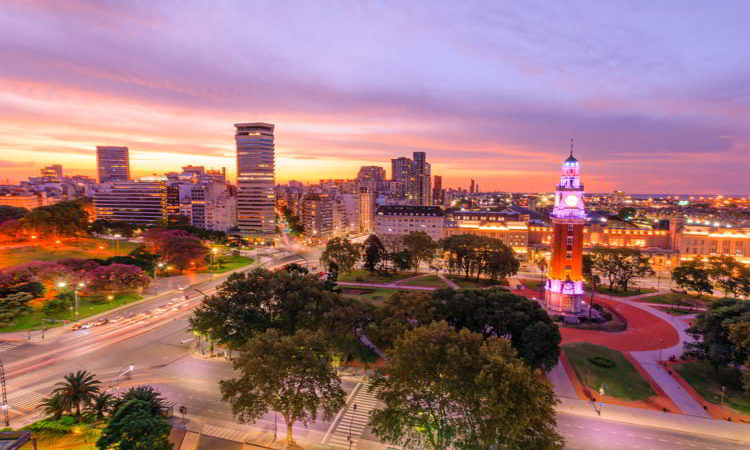 This Argentine Secret Saved My Financial Future And It Can Save Yours, Too

By that time, I had already done stints in Chad and Kazakhstan.

These aren’t places known for their good living.

I contracted malaria within two weeks of arrival in Chad and was diagnosed with bronchitis after 48 hours on the ground in Kazakhstan.

Everyone in Kazakhstan had bronchitis. Temperatures fell to minus 50 degrees each night.

Every night before falling asleep, I had to set my alarm to wake me so I could go outside to start my car at 3 a.m. Otherwise the battery wouldn’t turn over the next morning.

In Chad I was the only white guy for miles… in a village of mud huts.

Both moves were made on the directives of the international oil drilling company I was working for way back then.

Was I just a glutton for punishment? Not exactly.

I had an itch for adventure, yes… but, more than that, I realized, even at that age, the advantages of being an American offshore.

I was a 25-year-old kid earning oil company wages that would be 100% tax free.

Then, New Year’s 1994, that drilling firm sent me to Argentina.

Arriving in Buenos Aires for the first time, my initial reaction was…

This isn’t Chad… this isn’t Kazakhstan.

The international airport was busy but organized… orderly. The drive to the domestic airport to connect to my in-country flight to northern Salta Province, where I was being posted, took me through a metropolitan area that I later learned holds a third of the country’s population.

But, again, this wasn’t Third World Africa. The people were well dressed, the men in suits, the women chic even… everyone going about their business.

This was before the internet, and I didn’t know I was going to Argentina until the day I left Kazakhstan, so I had had no time to study up on the country in advance of my arrival. I showed up and began trying to size up the situation as I experienced it.

At first I thought that the prosperity I was seeing was the result of the country’s vast natural resources. After a couple of weeks, however, the local economics became clearer.

Yes, Argentina was doing well… but not the typical Argentine on the street. They were struggling to make ends meet.

Stores didn’t indicate sales prices on items but payment terms. Want to buy a shirt? You could make eight payments of US$4. A television… that was 20 payments of US$30…

Store owners were confused when I asked what the price would be if I paid in full. I was supplying a new office and camp for the drilling company. I had a lot of shopping to do, both immediately and ongoing. Paying over time would have been a nuisance.

Plus I figured we should be able to get a nice discount by paying in full up front… and indeed we did.

With the discount, prices were more reasonable—not cheap but OK.

Then someone told me about shopping in Bolivia. The border was only an hour from the town in Salta where my operation was based, and prices in Bolivia were a fraction of prices in Argentina for, in many cases, the exact same products.

So my assistant and I started traveling to Bolivia to do our shopping.

The Old Money Argentines Had A Secret

That got me thinking…

Why was Bolivia so much cheaper than Argentina?

Locals would tell me stories about when the reverse had been true. They could remember, they said, when Bolivians came across the border to shop in Argentina, where prices were much lower.

Pesos or dollars… the average Argentine on the street didn’t know the difference and didn’t care.

However, the more sophisticated Argentines… the business people and the old-money families… they did understand the difference… and they wanted U.S. dollars.

In fact, they were accumulating them and hoarding them… in bank accounts outside the country.

They knew that the situation created by the artificial currency peg was unsustainable, so they were squirreling away everything they could and storing it outside the Argentine economy.

Prices for everything in Argentina rose and rose until, eventually, the country’s manufacturing sector vanished. It became too expensive to produce anything in the country. Cheaper to import goods… so that’s what everyone did.

I left the drilling company after six months in Argentina, and it wasn’t until eight years later that the economics of what I had lived through during those six months in 1994 became much clearer to me.

In December 2001, Argentina removed the peg between its peso and the U.S. dollar. The government converted all bank accounts from dollars to pesos in one fell swoop overnight.

Same for debt. Whatever you owed was no longer repayable in U.S. dollars… but now Argentine pesos.

People with savings in banks woke up one morning to find that their account values had been decimated.

Meantime, farmers with mortgages on their properties got big breaks as the peso fell in the wake of the decoupling. In 2002, the exchange rate dropped from 1-to-1, where it’d been with the peg, to as low as 4-to-1.

Banks closed and real estate prices collapsed. It was a bona fide crisis investing opportunity and perhaps the best chance of our lifetime to buy property in this country.

And I did. Friends and I purchased three downtown Buenos Aires apartments over the next six months. Those were some of the most successful buys of my career.

I was surprised, though, during my property scouting trips and then during the time I spent in the country over the next two years, while the local economy was trying to stabilize itself, by the Argentine businessmen I was meeting. They weren’t nearly as panicked or even concerned as I’d expected them to be.

They weren’t struggling financially. In fact, they were doing quite well.

What’s going on here, I wondered. What do they know that I don’t?

And then finally it began to sink in…

The businessmen and professionals I was speaking with were the ones who had been accumulating physical dollars and keeping as much of their wealth as possible outside their country.

They could see the writing on the wall and had taken steps to prepare for the collapse they knew was inevitable.

Argentina’s economic history is filled with dramatic ups and disastrous downs. Over generations of experience, Argentines, I realized, had learned to diversify their wealth outside their own country.

That revelation in 2002 about the wisdom of keeping the bulk of your money outside your home country made a big impression on me. By this time, I’d already begun working to diversify my life and my investment portfolio, but watching this lesson play out in real life in Argentina compelled me to work harder and faster.

I wanted to be like the Argentine businessmen who were able to come through unfazed from what amounted to total economic collapse in their country… not like the average Argentine on the street struggling to pay his rent or buy groceries for his family because his life savings had literally disappeared overnight.

And, thanks to those Argentine businessmen, I understood in a real way the secret to making sure my family and I would be OK no matter what happened in the economy or markets of our home country… or of any other country for that matter.

For these Argentines, diversification was not a theoretical exercise. It was the key to survival.

It would be nice, wouldn’t it, not ever to worry about inflation… or market ups and downs… about the value of the U.S. dollar… P/E ratios… or any of the other financial indicators that could be causing you to lose sleep.

It’d be nice, too, wouldn’t it, to be able to retire when you want… perhaps to take off for a new life in a new country, an adventure overseas long before conventional retirement age… and still be able to afford to do all the things you enjoy… thanks to a steady stream of income.

Great, too, I’d say, to be able to leave behind as much wealth as possible for your loved ones while losing as little as possible to the taxman.

I can tell you right now that you can have all of this.

You can guarantee yourself and your family a prosperous, free-to-roam, and financially stable future no matter what the rest of the world gets up to…

It comes down simply to learning the lesson I learned years ago from the Argentines:

Keep what you’ve got tangible and accessible… but keep it at a distance.

Remember, I got started at this when I was 25 years old. I was no millionaire. I was the son of working-class hippies. My initial investment nut was a gift from my first wife’s parents.

You don’t need a lot of capital. You just need to take action.

And with everything going on in the world right now, you need to take action now.

Argentina Diversifying Overseas global property real estate argentina Real Estate Overseas
Share:
Offshore Living Letter ® 2022
Legal Sitemap Privacy Policy
* Type a keyword then press Enter
We use cookies to ensure that we give you the best experience on our website. If you continue to use this site, you're agreeing to our policies.Thanks, I Accept!Privacy policy