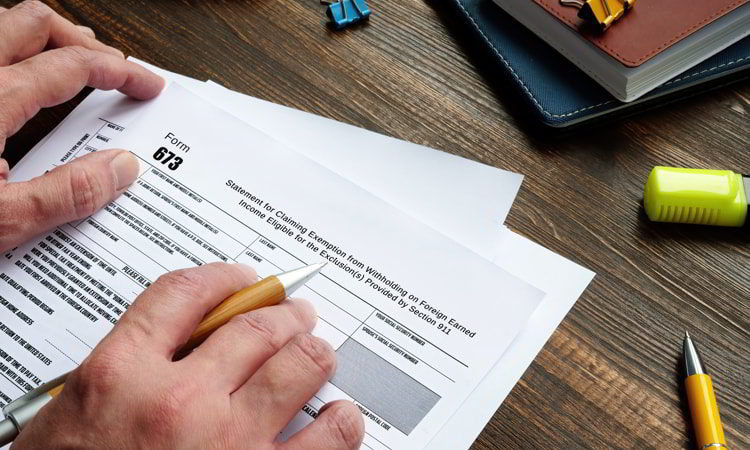 The most important tool in the U.S. expat’s tax toolbox is the foreign-earned income exclusion (referred to in tax-planning circles as the FEIE or “the exclusion”).

All U.S. citizens and residents who earn more than US$12,550 (single) or US$25,100 (married, filing a joint return) in a year must file a U.S. personal income tax return no matter where you reside.

You must file, but that does not mean you must pay tax. One of the many benefits for an American living or retiring abroad is that, once you’re a foreign resident, you’re eligible to take advantage of the FEIE.

The exclusion applies to foreign-earned income only—that is, wages or self-employment income (independent contractor earnings, for example) you receive for services you perform while living outside the United States. Wages can come from a U.S. corporation or a foreign corporation, including an offshore corporation, and it does not matter if you are also a shareholder or owner of that foreign corporation.

Note, though, that earned income does not include interest, dividends, or other investment or passive income.

The key is to qualify. Bottom line, you qualify for the exclusion in one of two ways:

To qualify for the FEIE using the 330 Day Test, you must be in another country (just being outside the United States doesn’t work if you’re in international waters, for example) for 330 days out of any 365-day period. It does not matter if the 330 days are over two calendar years (between Nov. 1, 2020, and Oct. 31, 2021, for example), and you can avail of a special extension to file your tax return to give you time to meet this requirement.

In this case, you achieve foreign residency by moving to another country and making it your “home.” You can intend to return to the States in the future, but you must move to the foreign country for an “indefinite” or “extended” period of time that must include one full calendar year.

The 330 Day Test is fact-based, while the Bona Fide Residency Test hinges on your intentions and is therefore more difficult to use and to prove.

The Bona Fide Residency Test is one of the most misunderstood and misused sections of the U.S. tax code. You are a bona fide resident of another country if you move there and make it your home. You show this, typically, by filing and paying taxes in that country.

The perfect example of a U.S. foreign resident is a person who moves to a foreign country, does not intend to return to the States, files and pays taxes in the new country, obtains a long-term visa that allows him to work in that country, sells his U.S. home and buys one in the foreign country, and who relocates with his family.

Of Course, Though, Few Cases Are Perfect

For example, a husband might move to France to work there indefinitely, leaving his family in California. Maybe he returns to the States for 40 days per year to visit and intends to return again full-time as soon as financially possible.

In this case, the American in question has a good chance of being allowed the exclusion, assuming he is physically outside the States for at least one year, but it’s not guaranteed, and the determination by the IRS would depend on many facts and factors.

Note that simply being out of the States for a full calendar year does not make you a resident of a foreign country. For example, if you go to a foreign country to work on a construction job for a specified period of time, say 14 months, you ordinarily would not be regarded as a bona fide resident of that country, even though you’re living and working there for one tax year or longer. The length of your stay and the nature of your job are only some of the factors taken into consideration.

Why Bother With The Residency Test?

If the residency test is so complex… you may be wondering… why should you use it? The biggest reason would be if you want to be able to spend more than 35 days a year in the United States.

Furthermore, once you qualify as a resident of a foreign country, you remain a resident of that country until you give up that residency. With the 330 Day Test, you must be out of the country for 330 days of each 365-day period. In other words, the determination is made year by year.

Plus, with the residency test, you can qualify for all or only part of a year. Here is an example from the IRS website:

Finally, understand that the foreign-earned income exclusion is “use it or lose it”. If you don’t file your returns year by year, you can’t later go back and try to claim the exclusion. You’ll be required to pay U.S. tax on all your worldwide income for any year in which you failed to file.