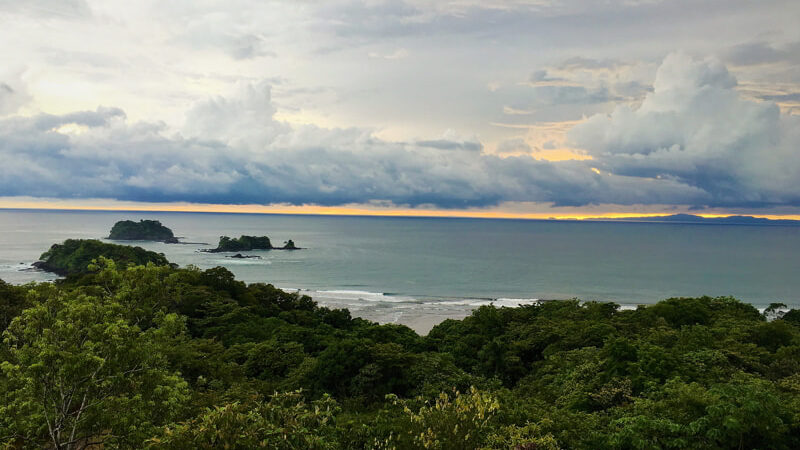 Who’s Crazy Now? (This Is The Real Reason I’m Hiding Out On Panama’s Azuero Sunset Coast)

Kathleen and I are now more than two months into this extended stay on Panama’s Azuero Sunset Coast.

That is to say… we’ve been here almost long enough to be able to forget about all the craziness going on in the “real world.”

With no television to feed us the political theater back in the United States… the latest pandemic statistics… or the most recent climate change discovery… we sometimes forget ourselves and imagine that all is right in the world.

Then I scan the newsfeeds on my iPad… note, for example, that BitCoin has hit US$60,000… and am forced again to question the sanity of our world.

Mass shootings in the United States were at a 10-year low in 2020… but that was because of the pandemic shutdown. The two back-to-back this month remind us that, while most Americans wonder whether it’s safe to live or travel so many places overseas, they might be smarter to worry about going to the grocery store wherever they’re living right now.

Of course, out here on this virgin coast of Panama, life isn’t perfect. We have our concerns, as well.

We’re at the very end of the dry season. This time of year, a particular bug that is particularly attracted to me is very active. I’ve got bites on my arms and legs.

Earlier this month, our deep freezer vibrated its plug out of the wall. We didn’t notice for a couple of days… and so lost a week’s worth of shopping.

So it goes in paradise…

But I’d choose mass bug bites over mass shootings, given the option.

And that’s really my point.

Options. You Do Have Them. They’re Ever-Available

You just need to put in the effort required to organize your life in a way that allows for them.

Yes, it takes some money, but it doesn’t require a seven-figure bank balance.

Others have saved enough of a nest egg and then budgeted and managed expenses effectively enough to be able to move from one place to the next without spending a fortune… for years.

Still, ask most people why they haven’t taken the steps to diversify their lives in ways that would allow them to remove themselves from the broader global madness… and they’ll say money.

But I don’t think that’s the real answer.

Why Most People Don’t Diversify Their Lives

The real answer is fear.

Fear of making a mistake… financial or otherwise.

Fear of the unknown…

Fear that they won’t be able to figure out how to make a success of such a bold undertaking.

I guess I’m lucky. I started internationalizing my life before I was old enough to recognize any of those fears. I had the idea that I wanted to work overseas from a very early age.

I also imagined, back in my 20s, that I’d build a nest egg and retire early… like my friends Paul and Vicki Terhorst have done. Paul and Vicki are now in their 70s and have been retired and traveling the globe for more than half their lives.

That retire-early idea didn’t work out for me… but not because I didn’t have the option.

Again, I was lucky. I found a way to earn an income that I so enjoyed I decided I didn’t want to retire from it.

I had a plan very early… but I’ve made adjustments along the way… taking unexpected leaps as opportunities have presented themselves and working in real time to put the pieces together, year by year, decade by decade, trying to remain flexible every day along the way.

Friends and strangers have called me crazy from the start… but now, today… honestly… I’d suggest that the opposite is true.

I’m feeling pretty good about the life I’ve been able to build… and I’d have to say that anyone who isn’t working to internationalize their life… well, they’re the crazies.

In the United States right now and for too long, politics are polarized, infrastructure is failing, and people are shooting each other randomly and regularly.

It sounds like the start of a country music song.

I like country music, but I’d rather not live the sadness personally… which explains why I’m on the coast of Panama right now enjoying the beach and the sun.