The Rise Of Anti-Capitalism: The Death Of Free Trade? 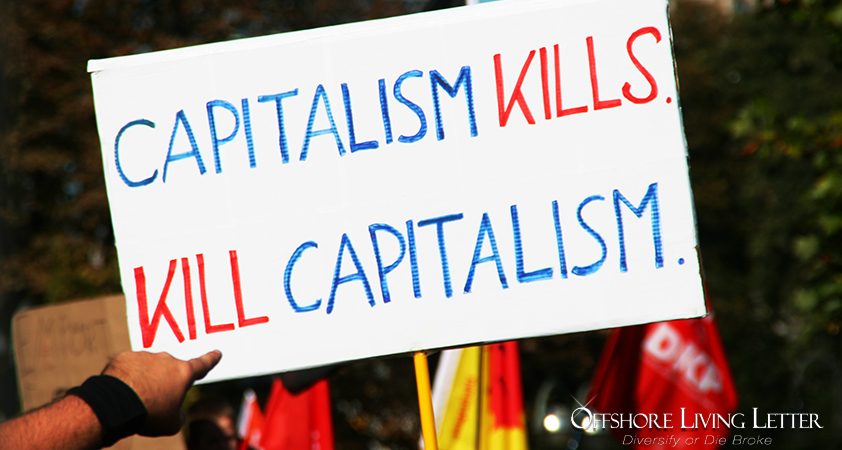 4 Predictions For Our Anti-Capitalist World

The world seems to hate capitalism these days.

Teresa May, Britain’s new anti-capitalism prime minister, just outlined her goals. She railed against the “international elite.” I think that term might include you and me; I’m not sure.

According to the Financial Times, PM May set out an “agenda of state intervention, more workers’ rights, an assault on failing markets, and a crackdown on corporate greed.” She says it’s “time to remember the good that government can do.” She wants to put worker and consumer representatives on boards and force companies to publish pay ratios and the number of British citizens on the payroll. She proposes more market intervention to make sure markets behave the way government wants them to behave.

In this case I’m sure she means you and me, we citizens of the world. She dislikes us, dislikes the expat mindset.

And here’s the thing. Teresa May represents the U.K.’s right-wing Tory party. She’s on the pro-business end of the spectrum.

What To Expect As An Expat?

First, we can expect more capital controls. More than anything, anti-capitalists hate free trade. This is the one thing that unites Trump and Clinton, May and Hollande. Free trade depends on moving money as well as goods. Anti-capitalists will try to shut down the money flow that enables commerce.

I’m writing this in Bangkok, where more and more exchange houses pop up in tourist areas. These exchange houses operate on tiny spreads, which I initially found puzzling. They must lose money operating on such small margins. But then a friend explained it.

Owners of these exchange houses need dollars to spend overseas. They pay for their daughter’s education at Yale, for their second home in Los Angeles, whatever. Thailand has tight controls over money transfers abroad, so these owners need an alternative. Next time a relative heads to the United States, he or she will stuff his pockets full of hundred-dollar bills from the exchange house. In effect, the exchanges amount to small-time black markets.

Vicki and I lived in Argentina during periods of strict capital and exchange controls. Locals back then got around the controls via a robust black market. These days, though, I fear black markets will function less and less smoothly. Governments tie together too much, electronic records store too much. One exchange house I know in Buenos Aires was forced to shut down when it lost its bank account in the United States, allegedly because of the Patriot Act.

We expats will likely still have access to small amounts of money, via ATMs, for example. But for larger amounts I’d recommend legal transfers abroad sooner rather than later.

Second, we can expect trade wars. We cut off China, China cuts us off. Teresa May favors a hard Brexit, meaning EU trade matters little to her. Once trade starts to collapse in on itself we can expect shortages of favorite products. Boeing assembles planes in Seattle, but imports parts from around the world. If government bans even one country from shipping those parts, Boeing must stop making airplanes. Airplanes need all their parts, not just some of them.

I figure Boeing has enough clout to ram through exceptions to trade bans. But look for Costco to run out of your favorite French wine, for example… or toys for the kids from China… or TVs from Korea.

Third, I think government pensions are safe. Anti-capitalists want more government, not less. Once you’re on the payroll, with Social Security or VA benefits or whatever, politicians will refuse to cut you off. You may have trouble moving your pension abroad, via ATMs or bank transfers, but I doubt it. Small amounts should continue to go through.

A bigger problem might be exchange controls at your end, the overseas end. In Argentina, for example, until late last year ATMs dispensed pesos at the official rate. Use an Argentine ATM to withdraw pesos against a U.S. bank, and you were effectively charged a 50% premium. I can see this problem showing up elsewhere.

Finally, anti-capitalism will bring on more economic suffering, which in turn will be met by more anti-capitalism. I see a slow spiral down here, a winding back of growth, investment, trade, and prosperity.

However, I see little to fear from a decline. We can live on past prosperity for years more, maybe decades more. Look at France, which hasn’t seen any growth to speak of for almost 40 years. Yet France remains a pleasant place, the French enjoy their lives as much as anyone.

Look to the French as role models in an anti-capitalist world.