Why I Started Carrying Cash Abroad (And So Should You) 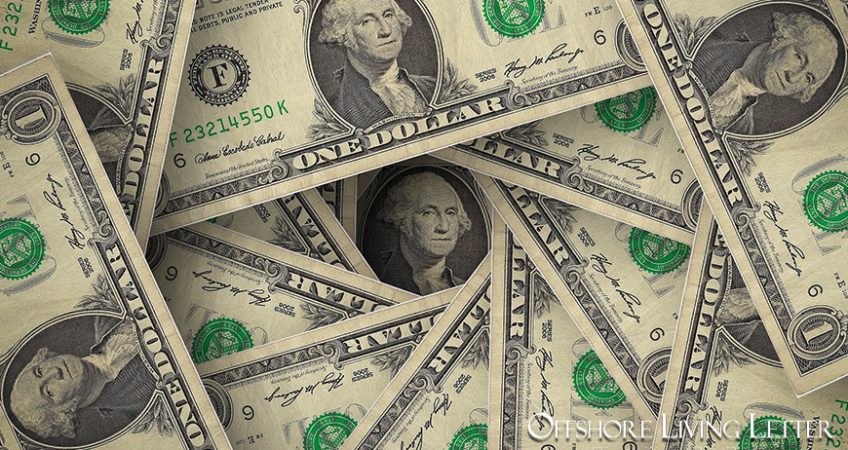 How To Survive The Global War On Cash

Here’s some fresh advice, something that goes against what Vicki and I have been saying and doing for at least 30 years.

Carry more cash when you travel or live abroad.

I hate to recommend cash. With cash we’re vulnerable to theft and loss. Some years ago friends rented a beach house in Uruguay, hid their cash under the stove, forgot about it, and later baked a pie.

They had to send the burned bills to the U.S. Bureau of Printing and Engraving, and eventually received full reimbursement.

So cash presents risks. Still, I recommend more cash because of several problems in recent years…

I’m writing this in Taiping, Malaysia. On a previous trip to Malaysia I tried and failed to use my E*Trade Bank debit card in a cash machine.

Our debit cards get blocked so often, in so many places around the world, I took this snag as routine. I called E*Trade to clear my card and was assured my card was clear. The punch line: “We’ve blocked Malaysia.” It wasn’t that my card was being blocked… it simply wouldn’t be accepted in the country. I had other cards, and one worked… but what if other banks follow the E*Trade lead?

On a recent trip to Argentina, we tried half a dozen ATMs in Buenos Aires before we found one with cash. Then we were limited to only 1,000 pesos—about US$60—and were charged a fee of nearly 100 pesos. I later learned the bank stepped on the exchange rate for another 5%; my total cost to get the cash came to 15%. Fidelity reimbursed the 100-peso fee, but I was outraged.

A day later I found a machine that gave me 2,000 pesos, twice the amount, but with the same high fees. Slightly better. But the machine only let me do two transactions a day.

I finally gave up and exchanged US$100 bills with a friend. Argentines themselves seemed desperate for cash. We saw stores offering 20% discounts, even 30% discounts, simply for payment in cash. Restaurants knocked off 10% or sometimes 20% for cash or, as an alternative, added an extra 10% for a credit card. We saw so many benefits for cash, yet found it so hard, and expensive, to get the stuff from ATMs.

In Kiev, Ukraine, last year, five or six banks had branches near our hotel. I typically had to check all or many of them before I found one with reasonable limits of US$300 or so. Others had only small bills and released only small amounts.

India has always presented cash problems. On our first trip to Mumbai (Bombay), airport ATMs were out of order. I was informed that the airport exchange dealers make sure the ATMs remain out of order.

With nonworking ATMs, airport exchange dealers can collect high fees from those who need rupees to pay the cab.

Then, in November, India abruptly shut down nearly the entire cash economy. President Modi decided to make 500 and 1,000 rupee notes, some 84% of the cash money supply, worthless. He placed tight restrictions on withdrawals of the new bills and on exchanges of the old ones.

Indian ATMs remained empty for weeks. When newly designed bills finally arrived in banks, hundreds of Indians crowded in line to get their hands on the cash. Travelers relying on ATMs could get nothing, or only small amounts. Friends on the ground in India reported that even dollar bills failed to buy cash rupees, simply because nearly all rupees had been taken out of circulation. Crisis. But one day those dollars bills will come in handy.

Bank of China nearly always has ATMs that work, but the problem is finding the machines in smaller cities. We decided to open a bank account in China and secure a local debit card to enable us to get cash when we needed it.

Last October, I tried to do an online purchase with my Capital One Bank Visa card. In my experience, CapOne denies most overseas online transactions, so I called to clear my US$265 charge in advance. I went through two frontline people before I got to a supervisor. She took down my information, noted the amount, and assured me my online transaction would go through. I spent over half an hour on the phone.

The next day CapOne promptly denied the transaction. Foreign banks these days charge higher and higher ATM fees, sometimes US$6 to US$8 a pop. My favorite bankers, Schwab and Fidelity in the United States, reimburse those foreign ATM fees. But most European and American banks make you pay the foreign ATM fees, and then add fees of their own, for example, three euros (or dollars) per transaction, plus 2% to 3% of the amount withdrawn.

American banks call the 2% to 3% a foreign transaction fee.

In a fairly new scam at ATMs and online, banks abroad try to convert to the card’s currency—in my case dollars—at an unfavorable rate. The ATM asks, “Do you want to leave Visa’s system and let us make the exchange to dollars for you?” The answer should always be “no.” Say “yes” and you get hit for an extra 3% to 7% on the exchange rate. Be careful. Often the ATMs use such convoluted wording—intentionally—that you may unwittingly permit the foreign bank to convert to dollars.

To give an example, I recently bought plane tickets from Air New Zealand’s online site. I accepted the price in N.Z. dollars. After entering my U.S. card data, a message said something like, “for your convenience we have converted the amount due to US$223. If you prefer to pay in New Zealand dollars, tap here.” Naturally I did the tap.

Some banks—and restaurants, hotels, and websites—go ahead and convert at a rip-off rate without giving you a local currency option. I’ve seen this exchange-rate scam at Argentine ATMs, ATMs at small banks in France, at some hotels in France, and in restaurants in Thailand. I think these rip-off conversions border on theft. Yet more and more banks around the world will likely start doing their own conversions, and using their own exchange rates. The resulting mega-profits for the banks will prove irresistible.

In France and Spain last year I tried self-checkout at supermarkets, only to have my U.S. card rejected because the machine required a signature. Unlike in much of the world, U.S. cards still require signatures, something Europe replaced with PINs long ago.

When it comes to cash, we’re regressing. When Vicki and I first retired, in the 1980s, we’d go into banks all over the world. We’d put down our debit card, our passport, and get nearly whatever amount we wished. We never carried any dollars in cash. Then came ATMs, even more convenient.

We used ATMs for decades without fees and with only a few problems here and there. At times, we tried to go into a bank, as in the old days, but were directed to the machines outside.

Most of today’s card problems result from card fraud. Sophisticated fraudsters from Russia, Pakistan, Nigeria, the United States, and other countries rip-off ATMs, their banks, and retailers around the world.

In desperation, banks deny transactions. Call to complain, and bank people will listen sympathetically. Then the bank will deny the next transaction, too.

A friend recently traveled to Southeast Asia. As an alternative to cash, he bought travelers checks he purchased in Germany for a 1.5% fee. He found that Asian banks charged another 3% fee to cash them, and then only after my friend went to the bank’s head office, filled out forms, and waited hours in line. Frustrating.

Now, without banks, without machines, we’re stuck. I believe we’ll have to start carrying more cash, say US$2,000 or so on most trips.

Most travelers carry an ATM card from a large European or American bank. If you use the card, figure you’ll pay 10% or more on withdrawals, including local ATM fees, foreign transaction fees back home, and now the local exchange-rate rip-off explained above.

My advice: Switch to Fidelity or Schwab in the United States. And carry a wad of hundred dollar bills in a money belt.

I hate cash, especially in high-crime countries. But I’m resigned to traveling with more of the stuff. I refuse to pay 10% to 15% of my travel money just to get a few pesos, rupees, hryvnias, or ringgits.