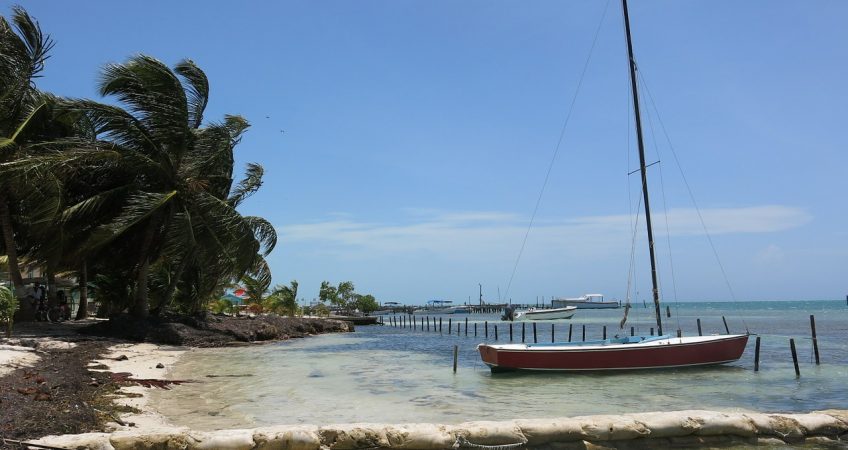 If The World Collapses, Here's Where You'll Find Me (Hint: It's In Belize)

I’m in Belize this week for my Global Asset Protection And Wealth Summit. Kathleen and I arrived in Belize City yesterday afternoon and took an in-country flight out to Cayo to visit our neem trees. When we were last in Belize, in August, we commissioned this first round of tree planting, about 100 neem trees to create a hedge around the border of the 10 acres we own in Maya Spring Estates. The neem will act not only as a hedge, but also as a deterrent to pests. That’s the theory.

Ten acres isn’t a huge piece of land, but it’s big enough for us to begin to learn what we’re trying to learn. Kathleen and I both have an interest in farming and the sustainable life, but neither of us has much practical experience. Our 10-acre parcel in Cayo, Belize, is our first investment in fixing that.

The property is bounded on one side by a tree-lined creek and on another by the internal road for the project. The remaining two sides face the outside world, and it’s along these two edges that we’re creating the hedge. We may also want to plant neem at the creek to help keep the mosquitos at bay. We’ll decide that this visit.

The 100 neem that have been planted look like sticks poking out of the ground in long rows. I’m assured by my agricultural expert, Con, that they will grow enough between now and January when I next return that I’ll be able to recognize them as trees.

Neem trees are the start of the plan. I’ve also commissioned Con to put together a full planting plan for the 10 acres to include fruit and hardwood trees. We’ll harvest the fruit trees for immediate consumption, either eating the production ourselves or selling it in the local farmers market. The hardwood trees are a longer-term investment that the kids likely will benefit from rather than Kathleen and me.

Owning this property in Belize is one of our backup plans should modern systems completely collapse. The farmhouse we’ll build on the property (in the style of Andrew Jackson’s plantation house outside Nashville) will have access to the main electric grid, but it will also have solar electric so we won’t have to worry should we lose grid power. The property has its own water source, and we’re installing our own septic as well. Our house here will be completely off-grid as they say.

And thanks to the fruit trees and the planned vegetable gardens and animal pasture, we’d be able to produce our own food to survive if we had to.

While I don’t think modern systems will completely collapse anytime soon, I like the idea of a backup plan. I also like the idea of having someplace where we can enjoy spending time unplugged and working our own land, the whole family engaged. Thinking longer term, we’ll also make some money from the trees we’re planting.

Con’s plan for fruit trees includes avocados, oranges, bananas, and breadfruit. Those can be sold easily locally. For hardwoods, we’re planning cedar and mahogany, which are always in demand globally as well as some local hardwoods. Con has recommended Santa Maria and Cabbage Bark, as there’s a strong local market for both for housing and furniture.

The hardwoods won’t pay off for 15 or 20 years, and the harvests from the fruit trees won’t cover the carrying costs of the property…though they’ll help to keep the family fed in an end-of-days scenario. This visit, though, I’ve begun a conversation with Con and others about a larger-scale agriculture project in Belize. It’s too early to share any details, but this new agricultural undertaking is a big current focus for me. I hope to have something pinned down by January.

“Lief, I have spoken to two banks that I bank with about a reference letter for opening up an overseas account, and neither of them has any idea what information to include.

“Could you possibly provide some assistance as to what they should include in a reference letter for me?

Most U.S. banks won’t draft a reference letter to include anything more than your name and the fact that you have an account with them for X number of months or years. However, that should do for most overseas banks.

The point is to show that you have had an account in good standing with another bank for at least six months. The longer the better, of course, and some offshore banks won’t accept a reference letter from a bank where you’ve had an account for less than a year.

Some U.S. banks will include a statement referencing your average account balance but not specifically. If you keep about US$10,000 in the account on average, they might say you have an average balance in the low five-digit range.