Why A Second Passport Is Today’s Smartest Protection Plan 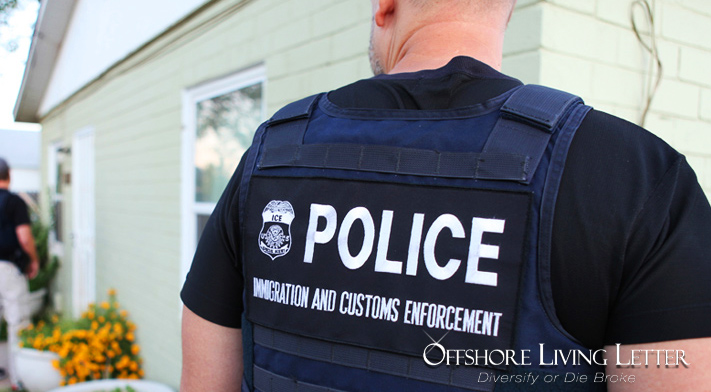 Don’t Tell ICE, But My Name Is Ommar

What do a British school teacher, a Russian Playboy model, and Muhammad Ali Junior have in common?

They’ve all been stopped by U.S. immigration.

The British school teacher was barred from boarding a flight from Reykjavik to New York.

And he was traveling as a chaperone for a group of students visiting New York when he was searched, interrogated, and sent back to the U.K.

The Russian model was interrogated for several hours because among her possessions was found a business card for a company that sells surveillance and security equipment.

Immigration thought she was a spy… because of the business card.

Why would a spy need the business card of a surveillance store? Don’t governments give them the necessary spy equipment as part of the gig?

Muhammad Ali Junior was stopped on a flight returning to the United States from Jamaica.

His mom was traveling with him, but immigration separated the two and interrogated each separately.

Muhammed Ali’s wife happened to have a picture of herself with her husband. When she produced it, ICE let her go.

The son wasn’t as lucky. I guess he wasn’t carrying a photo of him with his dad… just his dad’s name on his U.S. passport. So U.S. immigration pulled him aside, questioned him about his religion, and detained him for a couple of hours.

While my opening line above may sound like the setup for a joke, I don’t find any of these stories funny.

I’m bracing myself for the day that some over-eager ICE agent trying to prove himself to his superiors pulls me aside as I try to transit through a U.S. airport.

You see, my middle name is Ommar.

Of course, I appreciated this fact when traveling in Egypt. Every immigration officer I encountered in the Cairo airport, every hotel staff member across the country, and all tour guides we worked with along the way picked up on my middle name when reviewing my passport. It earned me extra smiles and waves down the line.

Oh, wait, I’ve traveled to Egypt with my family on vacation! Maybe I shouldn’t have pointed that out. That’s another watch list I’m on now.

Maybe I’ll never be detained by U.S. immigration, but the possibility will be on my mind every time I pass through the country… just as it is for all of my non-U.S. friends. They go out of their way to avoid having to travel to or through the States… and, honestly, I don’t blame them.

One Australian friend who splits his time between Central America and Asia and who visited with me in Panama recently told me that he spends the extra hours and the extra money to fly through Europe coming from and going to Asia. It’s worth it to him to avoid the risk of being asked questions by intrusive immigration agents.

This guy isn’t doing anything wrong. He just doesn’t want the hassle.

And he’s not alone.

As U.S. immigration continues to treat visitors from other countries with something less than a welcoming attitude, other countries are going to respond in kind… maybe imposing additional entry requirements for U.S. citizens who want to cross their borders.

The EU is recommending imposing visa requirements for Americans because the United States doesn’t include five EU countries (Bulgaria, Croatia, Poland, Romania, and Cyprus) among those on the list for the U.S. visa waiver program.

The European Parliament recommendation isn’t binding, and I don’t think the idea will take hold. Still, it speaks to the real point.

In today’s world, you need… everyone needs a second passport.

When I first made the suggestion 20 years ago, most ignored it out of hand.

Why would I need a second passport, the average American wondered back then. Second passports are for criminals and others with something to hide, aren’t they?

That thinking was limited and incorrect then, but today it’s dangerous.

In today’s world, you need options… including for the nationality your passport identifies you as holding.

In today’s world, a second passport can be the smartest step you take as part of your going-offshore program… and a lifeline for your kids.