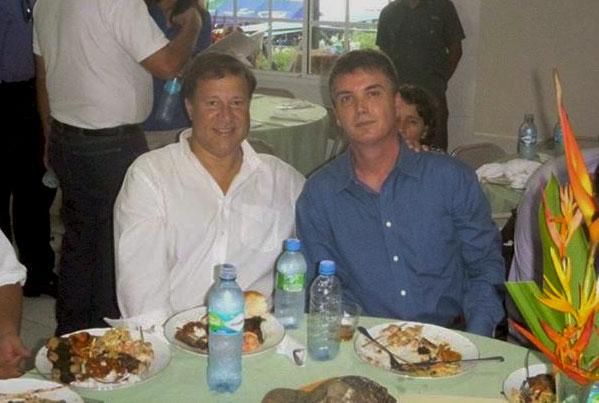 My Visit With The President

Living overseas you never know who you might run into. Over the years, Kathleen has met the presidents of two countries—the president of Ireland when we were living there and President Bolanos of Nicaragua when we were managing a real estate development project in that country while he was in office.

This week, we both met recently elected President Varela here in Panama. While we live in the same building as the president in Panama City, it took an official presidential visit to the district of Mariato on the Azuero Sunset Coast where our Los Islotes development community is located for us to manage to meet the man.

The Panama government, under Varela, has taken an interest in the western coast of the Azuero Peninsula. Historically, all attention has been paid to Azuero’s eastern coast. As far as we know, this week’s state visit to Mariato was the first-ever to that part of this country.

We’ve been working away in the background on our Los Islotes project for six years, minding our own business, following the rules, and doing our best. Now, it seems, we, and this region, are attracting attention.

Specifically, the Panamanian government is talking about implementing a road project that was commissioned and approved years ago. The previous president didn’t pull the trigger for some reason. This new road, though, would be an enormous boon to the region and to Los Islotes in particular. At the moment, to get from the surf breaks at Los Islotes to the world-renowned, Billabong-endorsed surf breaks at Playa Venao, you have to drive back up to the Panamerican Highway, over to the other (eastern) side of the peninsula, and then back down. That drive takes about five hours. Connecting the two sides by road at the bottom of the peninsula would create a ring allowing tourists, surfers, and locals to make a continuous trip around the peninsula. It’d also mean that Los Islotes would be less than an hour from Venao, a big plus.

The other big challenge in this region is electricity. We have power but not three-phase power. The new administration, under President Varela, is pushing the electric company to get three-phase electricity in place all the way down our side of the peninsula. Right now only single-phase lines run for the last 47 kilometers of this coast.

Generally, when governments speak of infrastructure plans anywhere in Central America, you can ignore them until you see dirt moving. Panama is an exception. This country has an impressive track record when it comes to following through on infrastructure promises. Panama is continually building and improving roads and bridges. We’ve watched over the past seven years as they’ve reinvented Panama City’s main drag along the Bay of Panama from a simple road to the highway, parks, and pedestrian areas of the new Cinta Costera. When Panama announced a new international airport, everyone figured it would be a decade before it was built, but the new airport at Rio Hato was completed in about two years.

Still, we’ve been hearing about the planned road improvement at the bottom of the Azuero Sunset Coast for about five years. However, after President Varela’s visit this week, the government focus appears certain.

The president didn’t come out to Azuero’s west coast on his own. He brought his entire cabinet. Kathleen and I had private meetings with the Minister of Tourism and the department heads for the Environmental Agency, the National Water Board, the Small Businesses Agency, and several others. Everyone is on the same page. The same talking points came up again and again—three-phase electricity, the new road, a new hospital for Mariato, and more and better schools.

The local turnout was tremendous. Everyone in the district wanted to be in Mariato to greet their president. Our project manager for Los Islotes passed hundreds of people on the road as he drove from his house up to Mariato. They were all hoping for rides to town.

The hundreds who made it to the bandstand outside the Mariato mayor’s office weren’t disappointed. Their president spent the better part of an hour in the street speaking with the townspeople and shaking hands. He spent the entire day in Mariato giving speeches and holding meetings, including having lunch with Kathleen and me (and about 60 other people at a Los Islotes-sponsored event). This wasn’t a whistle stop.

He walked out of our lunch carrying a copy of our Los Islotes brochure in his hands, and his minister of tourism said he was so impressed by what we’re doing (“this is exactly the product that Panama needs right now,” he told us) that he is planning a site visit to the Los Islotes property with three people from his office.

Our team on the ground out there worked for days to prepare for the event, an effort that I think paid off. Kathleen and I like to stay under the radar as much as possible, but we’ve reached the point with what we’re doing out on the Azuero Sunset Coast where we need some support. We can’t provide three-phase electricity or build a road around the bottom of the peninsula ourselves. We’re awfully glad the Panamanian government seems keen to step in at this point.

P.S. Kathleen took a picture of me with President Varela at lunch, if you’d like to have a look. He seems like a nice guy.

“Lief, you mention that foreign real estate does not need to be reported to the IRS. Is this independent of whether it is held in individual names, an LLC, or other entity?”

For foreign real estate to be nonreportable, it must be held in your own name.

That said, if you rent out the property or have other income from it, you’ll still have to report the income. If you hold the property in an entity, the entity’s balance sheet likely will have to be reported and the real estate will be listed (though not with any great detail).