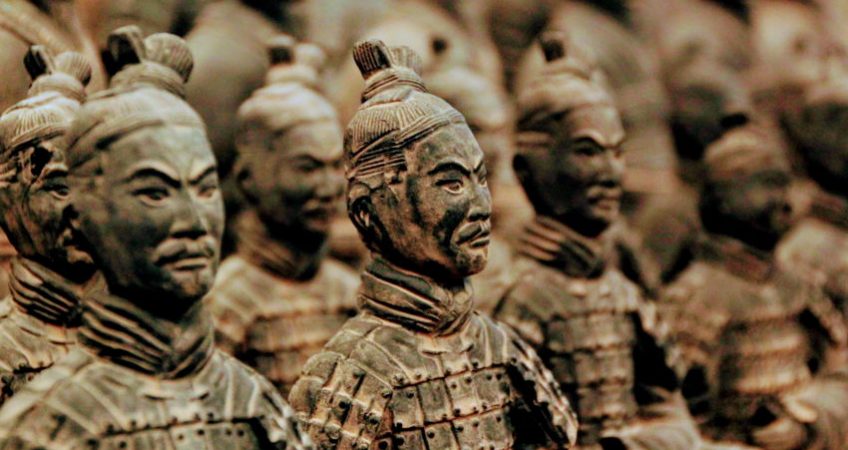 Reemerging After Three Weeks Offline In China, I Find…

“Few people like you make it this far,” our guide Anthony told us with a big smile as we approached the ruins of the central pagoda of the 2,300-year-old city of Jiaohe.

This time of year, key spots across China are crowded with tourists. However, in this part of this country, now and generally, the travelers are nearly all Chinese. The burgeoning local middle class is keen to explore, but we foreigners are thin on the ground this far west.

Like Paris, Jiaohe was built on an island. A garrison outpost of the Han Dynasty, it was formed of rammed earth and mud bricks on a plateau 100 feet above the confluence of two rivers. Thanks to the desert climate, much of Jiaohe remains, more than two millennia later. You can follow roads through the entirety of the city. It’s an archeological, architectural, and historical treasure, one of the best-preserved ancient cities in the world, and was a highlight of Lief and my Silk Road adventures this month.

“We hope you had a restful break,” our team in Panama City offered as they welcomed us back to the office this week.

In fact, our two-week Silk Road tour was, I have to admit, the most challenging trip I’ve undertaken. I return not rested but bulwarked and fortified.

Having survived those two weeks, I figure I’m ready for anything.

Don’t be put off. I mean that as an endorsement of the experience.

Indeed, if you’ve fantasized about the legendary exploits and escapades of the original Silk Road explorers and entrepreneurs, right now is the best time in your lifetime to follow their sandy trails.

Even two or three years ago, the trip was a less reasonable undertaking than it is today. Cities in this wild west were virtually inaccessible, and the going from one to another was rougher than most travelers are up for.

However, as China continues to invest in opening up this part of the country to global tourism and as more comfortable options for transit and accommodation come online, I predict it won’t be many more years before western China moves to the top of the 21st-century adventure traveler’s bucket list.

If you’ve an interest, you should see it before that happens.

Five years ago, China invited us Americans to apply for 10-year multi-entry visas, making it easier for us to go have a look-see behind these long-closed borders.

Then, two years ago, the government finished a new length of national highway extending all the way to the border with Kazakhstan. About the same time, it finished laying new train tracks and opened a series of new stations to, likewise, service this formerly ignored part of the country.

Meantime, development groups from China, Russia, and Europe have been investing here in hotels of legitimate international standard. As recently as two years ago, you could not have found a bona-fide comfortable place to spend the night after a day traipsing across the Gobi on camelback. Now key towns have one or two four- or five-star hotels with modern bathrooms, abundant hot water, cable TV, Wi-Fi, and restaurants with options beyond local rice and noodle specialties on their menus, terrace bars, and even (occasionally) champagne on their wine lists.

That is not to say that traveling where few white folks have traveled before is easy. This is not a trip for every man (or woman).

If the Americas are your home base, you’ll invest two days, más o menos, getting to Xi’an, the Silk Road’s starting point. Don’t worry about the lost time. Once you arrive and for some extended time thereafter, you won’t have any idea what day it is anyway.

Temperatures in summer can reach 45 degrees Celsius and higher. In winter, they fall far below zero. There is no spring or fall.

Travel times between any two points you’d want to visit are great. Our train ride from Xi’an to Zhangye was meant to be 9 hours; an earthquake delay stretched it to 11.

Then there are the toilets.

In rural China, going to the bathroom, especially as a woman, is an extreme sport.

The first couple of days, the stinking squat toilets are part of the adventure. Our first guide, Shine (Chinese guides leading English-speaking groups give themselves English-friendly names) joked that, in China, toilets are “happy places,” because you’re so happy when you’re finally able to leave them.

By day four, though, you begin to weigh the risks of not drinking water in the desert against the perils of entering another toilet area. At one stop, the facilities were a communal outhouse with room for five or six patrons at a go, no walls, stalls, screens, or privacy between you and your neighbors just inches away. You placed your feet on loose wooden planks alongside others doing likewise. The boards beneath the feet of the 70-something Chinese lady to my left wobbled and slid, but she held her stance. I don’t know if I could have done as well.

While this region remains an emerging destination, some locations you want to see can be delightfully free of even Chinese tourists and wide open for your private discovery.

But this is not the case everywhere.

The Cradle Of Chinese Civilization

The terracotta soldiers and horses outside Xi’an were a mob scene. We were pushed and jostled on the elevated viewing platform as we tried to find gaps in the crowd to see over the edge to the huge pits of excavated clay warriors below. It was more like a bad day at Disney than a glimpse at ancient human history.

This second day of our trip was also my first memorable toilet experience. More than 60,000 people per day come to see the life-sized pottery figures intended to defend Qin Shi Huang, the first emperor of China, in his afterlife. Maybe half those each day are women…

The day we visited I’d say all 30,000 of those women were in the toilet at the moment I arrived. I was swept along in the sea of them… into a stall and then out again before I’d finished zipping up my jeans. These stalls had doors, but none were closed. No time for that with a tidal wave of Chinese ladies pushing for their turns. I was, in fact, never alone in my stall.

Xi’an was the cradle of Chinese civilization, the base of the first Chinese empire, and the original starting point for the ancient Silk Road. Those facts plus the discovery nearby of the ancient terracotta army (made by accident by a local farmer in 1974) put this city at the top of every current-day Silk Road explorer’s itinerary.

Our next stop, Zhangye, a fast-train ride west, is less known and less accessible. Marco Polo spent a year here, smack in the middle of the Hexi Corridor, at a time when this was one of the most important points on the world map, the only western passage into or out of the Middle Kingdom. And legend has it that Kublai Khan was born here.

Today, few realize the historic significance of this increasingly accessible frontier, meaning that, visiting, you have the place nearly to yourself.

The Matisi Grottoes, about an hour outside Zhangye city, are a main attraction. Buddhists carved these temples into the cliffsides of the foothills of the Qilan Mountains starting 1,600 years ago. To reach them, you hike a zig-zag trail to nearly 10,000 feet. No restrictions and no safety nets as you climb the cliff face and crawl through narrow passageways and tunnels to reach level after level and tiny interior caves.

I got down on all fours to wedge myself through an opening that led to a grotto with an altar and a row of candles. Kneeling alone in silence, I lit one, wondering how long before this solemn spot becomes as overrun as the site of the terracotta warriors back in Xi’an.

I had the same thought at the Weijin Tombs outside Jiayuguan. The thousands of tombs on this site date from 220 to 420 A.D., and their brick walls are decorated with colorful paintings of everyday life of the time. Pictographs show people hunting and playing games… making tea and picking mulberries for silk production.

One tomb of a husband and wife is open for viewing. Its three small rooms are accessed by a narrow underground staircase. Climbing down the steps and then passing from one room to the next, bending close to study the wall art, I was grateful for what I realized was a level of access that can’t continue long. We could have reached out and touched the paintings. We could have snatched a tile from the floor. We could have taken out a marker and brightened the color in some of the faded drawings…

We didn’t do any of those things, of course, but no one was around to stop us if we’d been so inclined. Exiting, I felt protective of a treasure I hope the world will respect.

During its golden age, Silk Road travelers covered maybe as many as 20 kilometers per day. Traveling from Xi’an to Urumqi (the route we followed), a distance of about 2,500 kilometers, could take a year.

We did it in two weeks. Still, we imagined ourselves Silk Road pioneers, rising before dawn, packing our provisions, boarding our transport, and pushing, each day, farther west…