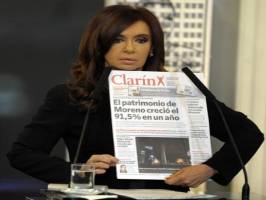 Americans aren’t the only ones getting ready to elect a new president. Another presidential race will be decided this month.

Argentina finally, hopefully, will get out from under the ridiculous and disastrous economic policies of current President Cristina Fernández de Kirchner. Estimates are that Cristina will leave the country with as little as US$8 million in foreign currency reserves.

Argentina has been locked out of the international debt market since it defaulted on US$93 billion of debt in December 2001. That 2001 crisis led to the decoupling of the Argentine peso from the U.S. dollar and that led to a property buying opportunity that I and many other foreigners took advantage of and profited from nicely.

The economy stabilized within a year or so of the peso debacle; real estate prices bottomed out around July 2002. Meantime, all U.S. dollar deposits in Argentine banks were converted to peso deposits (woe the poor dollar account holder). On the other hand, all U.S. dollar debt was likewise converted to peso debt. Farmers came out of the crisis far better than they entered it. All their dollar debt became peso debt, but their commodities continued to be sold on the world market for U.S. dollars.

Their debt cut to one-quarter what it had been, farmers carried on as an economic engine for Argentina… up to the point that the government under Cristina realized they were a prime source of hard currency and began to tax their commodity exports.

A series of other bad economic policies, also courtesy of Cristina, has brought Argentina back to the brink of collapse. The official rate of exchange today between the Argentine peso and the U.S. dollar is an over-valued 9.5 pesos. The black (or “blue,” as they call it in Argentina) market rate of close to 16 pesos to the dollar more accurately reflects the reality on the ground.

Tourists can easily find a way to exchange their dollars at the blue rate. Investors can get the blue rate, as well, but it’s not as easy… and the concern then becomes getting your dollars back out of the country.

Argentinians Are Hoping For A Change For Good

The Argies are hopeful that the next president will be able to get the country back on some more reasonable economic track. So am I. I have a strong affinity for this country. It’s a mess… and I love it.

I lived in Argentina in 1994. At the time, the peso was pegged to the U.S. dollar. I witnessed the effects of that policy. Argentina was an expensive place to live in 1994. The company I worked for had to rent vehicles and housing for senior staff. We paid US$2,000 a month to rent pickup trucks. A small three-bedroom house in the edge-of-nowhere Argentina (close to the Bolivian border) was US$1,500 a month.

In a less twisted economy, that house should have rented for US$300 a month, the truck for maybe US$200 a month.

Thanks to the 1-to-1 peg, it became cheaper to import goods than to manufacture them. The country’s industrial base shriveled.

After the fiscal fiasco of 2001, Argentines returned to making things, but the country’s manufacturing base disappeared again under the weight of the bad economic policies of the last decade.

That’s why I’m more interested in the outcome of Argentina’s Oct. 25 presidential election than I have been in the ridiculous debates taking place in the United States this month. I believe Argentina is just this side of being able to right its economy, again… whereas I’m certain the United States is continuing down a path to financial ruin, no matter who wins next November.

If I’m right about Argentina, we’re entering anotherwindow for investment. Time to start shopping for an apartment in Buenos Aires or a little finca out in the provinces.

“Lief, we bought some land about seven years ago in southern France hoping to build a retirement home in the near future. I would like to keep my Canadian finances separate from my French finances but have been turned down by two French banks for construction financing because I am not an EU resident yet. Do you have any suggestions on how I might find this kind of credit support in Europe?”

When we tried to get a mortgage for an apartment purchase in France last year, banks weren’t interested in lending us money. We finally found one bank that was interested in financing our purchase until they found out that we’re technically self-employed. That bank was Caisse d’Epargne. Again, they were more open-minded than other French banks we spoke with, so you could also try contacting them directly.