Invest in Panama Limes For Up To 18% Returns 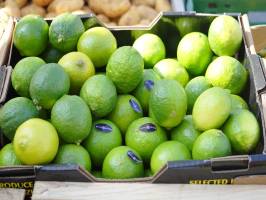 Agricultural investments have been a focus for me for the past half-dozen years. Unfortunately, as I’ve been reporting, it’s not easy to find agricultural projects geared toward the small investor.

However, early 2014, I began working with a group in Panama with an idea for a mango plantation investment intended specifically for the individual investor.

Their plan was to open up their plantation to small investors in an effort to grow more quickly and to achieve some economies of scale. I introduced readers to this opportunity to own their own piece of this mango farm while the development group took care of all of the work—planting, irrigation, fertilization, and eventually caring for the trees and harvesting the crop.

The response was overwhelming. The mango plantation sold out in June.

In the past few months, this same group has put together a small plantation of a different fruit tree at the behest of one of their biggest U.S. buying groups. The crop in this case is limes. Specifically, organic limes.

This developer launched this new project just 10 days ago, making 100 hectares of the new crop available for individual investors. Those 100 hectares sold out in six days. I’ve been involved with the launch of many real estate development projects, including now many different agricultural projects, and this is unprecedented. I’ve never seen anything like it.

I’ve been in discussions with the developer these past several days about how this opportunity might be expanded. More on this in a minute (bottom line, no, you haven’t missed out… yet).

What's So Special About This Investment?

Here are some of the reasons this Panama agro-investment should have your attention:

The IRR projection over the first 20 years of the plantation is just about 18%. That’s a phenomenal annualized return. For that level of return, you would expect great risk. However, this group is nearly finished implementing a 650-hectare mango plantation (in the last 18 months). It has a proven track record, meaning fulfillment risk is minimal. Furthermore, the developers own the land, they have their team on the ground, and they are preparing 150,000 lime saplings in the nursery for planting.

The full launch price for 1 hectare of lime trees is US$44,000; however, the developers have agreed to a US$5,000 discount for Live and Invest Overseas readers only, meaning that the cost to you as a LIOS reader is just US$39,000.

This opportunity is proving extraordinarily successful because of simple supply and demand. Greening (that is, a fungus attacking citrus crops) is causing shortages of limes in the United States. Meantime, demand continues to grow, especially for organic limes. Lime consumption in the United States has increased tenfold since 1980, according to the USDA, and lime prices have doubled since 2014, thanks to the reduced supply and the growing demand.

Demand is so great and supply so limited that one big U.S. wholesaler has contacted the development group in Panama to ask them to target this market. In other words, the developers I’m talking about already have a buyer. In fact, the project team has a letter of intent from this U.S. distributor to buy all the organic limes the plantation can produce. The distribution chain is already in place.

Investors in this new organic limes plantation own the land, the trees, the irrigation systems, and everything that is implemented on their property. The developers prepare the land and plant the trees, then the plantation is handed over to the management company, which cares for the trees. Also, intercropping is part of the plan.

Small cash flows are created from the intercropping starting in year 2. The lime trees start producing in year 4, with production jumping in year 5 and increasing slightly each year until year 10.

The developers will replant any trees that die in the first 10 years. In addition, the limes being planted are a variety of a Persian lime that is resistant to disease and pests thanks to its thicker rind.

This variety is also large, larger than a key lime, and is also seedless, making it more attractive to the consumer market.

Investing in agriculture can provide a great cash yield. The very big downside is that, typically, historically, you have to invest in and farm your own plantation. This is your chance to invest in a turnkey opportunity where you own the land and the trees… and someone else manages the farm for you.

For all of these reasons, as I’ve explained, this launch has been more successful than any other I’ve known or been involved with. When I spoke with the developers last week and they reported a waiting list of investors, I asked if they’d be willing to release any of the plantation hectares they had planned to keep for themselves. They have agreed and are allowing investors access to an additional 100 hectares at the same US$39,000 price (again, for Live and Invest Overseas readers only).

For more information, contact the InvestGPS team here. Identify yourself as a Live and Invest Overseas reader when you get in touch to be sure you’re eligible for the launch discount.

“Lief, you have to be crazy to talk about moving to France. Wealthy peoples are moving out because life is impossible there. I do not know how you are recommending people to move there—21% VAT, tax on your assets, high property tax, habitation tax, water, electricity, telephone very expensive, and on and on. Food very expensive. Gasoline very expensive. I don’t know what you’re thinking.”

France has a wealth tax, but few retirees would be liable for it. The first 1.3 million euros of assets are exempt. Furthermore, the wealth tax is a consideration only if you intend to become a full-time legal resident of the country. Come and go, spending never more than six months in France per year, and the wealth tax doesn’t apply.

I own property in Paris, and the combined property taxes (including the taxe d’habitation) amount to approximately 0.2% (that is, two-tenths of a percent) of the property value. Property taxes outside Paris are a bit higher; however, property taxes in most U.S. states are in the range of 1%… or five times higher than in Paris.

VAT of 21% is indeed high compared with the United States, where sales tax ranges from 5% to 9%.

In France, as in most of the world, income is taxed only at the national level; in the United States, earners also pay state (except in the handful of U.S. states that have no income tax) and sometimes even city income tax in addition. When you consider U.S. federal and state income taxes together, you arrive at total income tax burdens that are comparable to those in France.

Electricity expensive in France? This website shows that electricity per kilowatt hour wasn’t much more costly in France than in the United States in 2014. With the weakened euro, it’s possible that the cost of electricity in France is less expensive today in U.S. dollar terms. In addition, people tend to live in smaller homes and apartments, especially in Paris. Our total annual gas and electric bill when we’re in our apartment in Paris is less than half what we pay in Panama.

My wife and I have been in Paris for the past two weeks. I’m finding beef and chicken as much as three times more expensive than in Panama. However, other things are cheaper. We buy good wine for less than US$10 a bottle and bottled water for as little as 14 cents per liter. Fresh baguette is 1 euro. Fresh vegetables are very inexpensive compared with Panama, and the variety available is much greater.

It’s all about priorities and lifestyle. Paris can be more affordable than you might think… Panama more expensive. It depends on where, specifically, and how you choose to live.