Can One Bad Apple Bring Down Offshore Banking In Andorra? 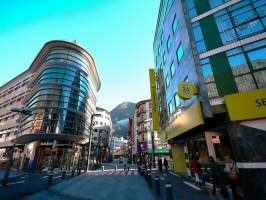 Why I'm Spending The Day In Andorra

I’m in Andorra today meeting with my bank here. The bank came under investigation by the U.S. FINCen (financial crimes arm of the U.S. Department of the Treasury) because its Panama branch allegedly allowed or helped Venezuelan officials launder money out of Venezuela. As a result, the bank is to be closed.

I don’t know anything about the who, what, or why of the accusations… and don’t care except that they mean I’ve had to make a trip to Andorra to meet with my banker in person to justify the small amount of money I have in his bank. As I said, the existing bank is being shut down… but a new bank is being formed. If my explanation for the source of my funds passes muster, my account will be moved from the “dirty” old bank to the “clean” new bank.

Andorra is a long way to come from most anywhere else on the planet. It’s a three-hour drive from any of the three nearest airport options in Spain and France. Fortunately, I was already scheduled to be in Europe for a couple of months this summer, so the side-trip to Andorra isn’t too much of a hassle; for me, it’s a four-hour TGV ride from Paris, where I happen to be this week. A friend also has an account at the bank in question. He had no plans to be in this part of the world before the July 31 deadline for claiming funds and was stressing over what to do.

Eventually my friend was able to speak with someone at the bank who advised him that he didn’t need to make the trip to Andorra. His account had already been cleared. I’m not sure why he’s off the hook and I’m not… but here I am in Andorra.

Rolling Over Or Herding?!

Five years ago, when the U.S. FATCA law had just been passed and the effects it would have on non-U.S. banks were a hot topic for speculation, a banker I knew from Andorra made a remark to me along the lines of: “We’ll all go back to goat herding before we roll over for the IRS.”

As of this writing, no bankers I know have become goat herders, and I don’t think bankers in Andorra have many other options. This tiny country’s economy is predicated on tourism, banking and, yes, goat herding.

Andorra’s banking industry was built by citizens of France and Spain (it’s wedged between those two countries) looking for a safe-haven option. Andorra is a country smaller than some Argentine ranches I know, with a population of 80,000 people, but it has six banks. Over the past 20 years, several of these banks have expanded beyond the country’s borders to tap new markets. Branches have been opened in Uruguay, Panama, and elsewhere.

As, when it came down to it, returning to goat herding wasn’t a realistic option, Andorran bankers, like bankers the world over, have had no choice but to succumb to growing pressures on the global banking industry. Hence the investigation by U.S. authorities into the alleged Chavez-associated money-laundering activities of the one Andorran bank I was unfortunate enough to choose when opening my account.

FATCA Has Played Out

Banks around the world have made their decisions as to how they’ll comply. The IRS has strong-armed most foreign banks into agreeing to report on U.S. citizens and their accounts. The new target is money laundering. Money generated by and required to fund illegal drug and other criminal activities, political corruption, and terrorism all needs to move around the world somehow. U.S. and other authorities are working aggressively to make it as difficult as possible for those involved in those activities to access and clean their cash. Those of us trying to run simple, honest global businesses are collateral damage. That is, ordinary people are facing increasing challenges as they work to transact legitimate across-borders business.

Banks have always wanted to know where large amounts of money have come from, whether you’re trying to move it via wire or a bundle of bills in a valise. However, some banks today are simply not interested in dealing with businesses that move money from one country to another, even if those movements are legal and reported. They don’t want to take the chance of being accused of laundering money or even of accidentally facilitating it. The risk is great these days. As a banker friend puts it, “One bad apple can bring down the whole bank.”

I’ve seen this and even experienced it personally in recent months in Panama, where banks are shutting down accounts that receive regular (in some cases any) wires from the United States to avoid being scrutinized by U.S. authorities for potential money laundering.

For us regular Joes just trying to diversify where we hold liquid assets, it’s hard to know which banks will or won’t close accounts on the basis of money-laundering concerns. Big banks, small banks, banks in different jurisdictions, big and small… all are facing the same challenges.

What can you do? Don’t keep too much of your money in any one bank… which can make it difficult, I understand, even to open an account at banks with large minimum account requirements.

“We would like more information on the use of an LLC to hold property in South America. Ecuador is of particular interest. Colombia is a close second. Is this an avenue that you have experience with or do you know others who have taken this route?

Generally speaking, you want to hold U.S. assets in U.S. entities and foreign assets in foreign entities. Putting foreign assets into a U.S. entity negates the asset-protection advantage of investing offshore. In such a case, a U.S. court has jurisdiction over the U.S. entity, making it easier for any U.S. plaintiff to get at the underlying assets.

My general strategy is to hold real estate in different countries in a single offshore LLC; however, this works better in some countries than others. For example, holding the apartment I’m buying in Portugal in an entity from a country on that country’s (really the EU’s) black list would create tax issues in Portugal. Panama, Nevis, and Belize are all on that black list, according to my attorney in Lisbon. As those are my generally preferred jurisdictions, I’m researching where else might make sense.

However, this strategy would work for Colombia or Ecuador.