How To Avoid The Dreaded Expat Rumor Mill While Overseas 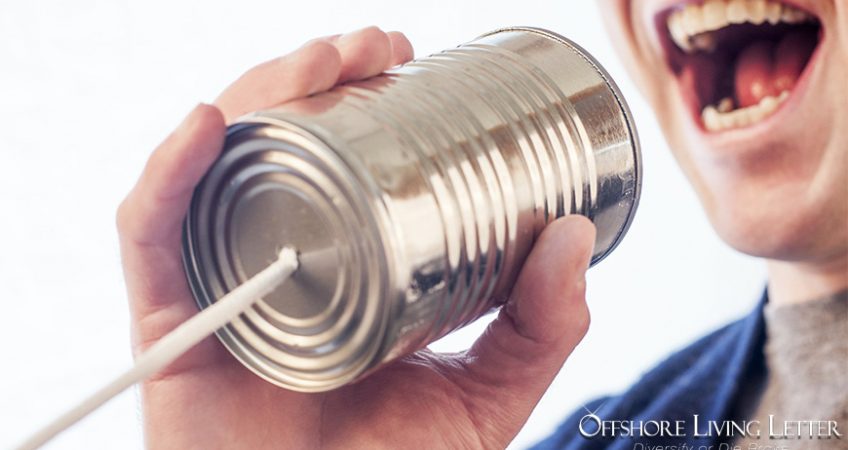 The Problem With The Coconut Telegraph

One thing you have to learn to navigate when you begin spending time or money in another country is the expat rumor mill.

It can be a force to be reckoned with.

You’ll be astounded by how quickly a story can circulate anywhere expats gather. The coconut telegraph is alive and well in the 21st century.

By midday Sunday everyone knows everything about the riotous party that took place Saturday night… who did this and that with whom else, etc…. even in regions without reliable internet or cell coverage and especially in regions where expats have more time to fill than imagination to come up with more productive ways for filling it.

In Belize City to host our Live and Invest in Belize Conference last week, I was approached by several attendees concerned because they’d heard that anyone in the country under the Qualified Retired Person (QRP) residency program can’t own a business.

It’s true that, as a QRP resident in Belize, you can’t work. A QRP is meant to be a retired person, so it makes sense that you can’t get a work permit as a QRP and are prohibited from taking a job. No need for a retired person to try to take a job away from a Belizean, the Belizean government figures.

Recently, though, some QRP residents in Belize have found themselves the targets of a government crackdown. The story on the street was that these QRPs were being harassed because they were working… for themselves. They were all entrepreneurs who’d started their own small businesses.

As I’ve found to be the case most of the time, when I dug a little deeper, I unearthed more to this story.

Under the QRP program, you’re allowed to bring in all your personal goods duty-free. You can also bring in a car with you or purchase one locally duty-free.

These are huge benefits considering the high import duties Belize charges, especially for motor vehicles. Import duties on cars can total more than 75% of the value of a car, depending on the size of the engine and other factors.

It turns out that some QRPs were taking advantage of the benefits of their status to bring goods into the country duty-free that they then used in businesses they started.

One example I heard was to do with a QRP who brought down furniture and appliances to fill a 12-bedroom house he’d built to run as a B&B.

That’s abusing the system, and the government has decided to get tough on the abusers.

To set the record straight, yes, you can start and run a business in Belize if you’re resident in the country under the QRP program. You simply have to follow the rules.

Always take what you hear on the street (or in expat forums online) with a grain of salt.

In addition, sometimes you should take reports you hear or read in the mainstream press with a little salt, as well.

Recently, a misconstrued press release created a great deal of anxiety among the Panama expat community.

The Panama government put out a press release discussing immigration. A local paper turned the release into a story about how Panama was rescinding an executive order that automatically renewed the initial 90-day tourist visa for tourists from most countries for an additional 90 days.

In other words, since the previous president, Ricardo Martinelli, issued an executive order allowing it, tourists to Panama have been permitted to stay in the country for 180 days before an extension or any other status is required.

Some in the local press, though, have been reporting that that executive order had been rescinded… meaning a tourist visa was again good for 90 days only.

If that were the case, it’d be a big deal for many expats in Panama as “indefinite tourists.”

That’s not an official immigration classification. It’s my shorthand for border-running expats… those staying on in a country as tourists indefinitely and hopping across the nearest border just in time to renew their tourist status again and again.

This is not necessarily legal, and I don’t recommended it. But people do it… including here in Panama.

If the change to the tourist visa time in country was for real, all border-running expats in Panama would need to hop back and forth to Costa Rica every three months rather than every six.

Border hopping comes at a cost of both time and money. Doing it twice a year can be OK. Four times a year means much greater hassle and expense.

The story in the local Panama press was picked up by expat bloggers who took the news story at face value. Who needs to waste time fact-checking, right?

Then the Panama expat community jumped in the fray. Boy, were they up in arms. How could Panama do this to us, they wanted to know…

I’ll leave aside the fact that the complainers are just this side of illegal aliens in this country. That’s not my point.

My point is that this misinformation spread far and wide before anyone took the simple step of checking the facts.

Do You Want To Know Who Finally Did Research The Story Before Spreading It Further?

Our very own Live and Invest Overseas editorial team.

My wife, Publisher Kathleen Peddicord, has pounded into their heads the importance of checking and confirming facts before publishing them. Not that we don’t make mistakes. But our editors understand that, when a mistake is made, the explanation better not be… well… I read that on so-and-so’s blog… so I assumed it was correct…

Such an editor’s lifespan with us would be short.

Eventually, the Panama government issued a second press release to correct the press article… after which the U.S. embassy sent around a clarification statement in response to the deluge of inquiries it was receiving.

It’s rare for misinformation of this magnitude to be spread so far and so wide and to be given such credibility.

Much more common is old information on the internet that people come across in google searches and accept as gospel without considering how long the information has been bouncing around in cyberspace.

Once on the net, forever on the net. However, not forever current or necessarily true.

One example of this has to do with tax changes in Colombia over the last several years.

Colombia has amended many aspects of its tax laws since I began paying attention about eight years ago.

When I reported on taxes in Colombia for the first time, the country imposed no separate capital gains tax. All capital gains were taxed at the appropriate marginal income tax rate, which topped out at 33%.

A year or two later, the Colombians introduced a 10% capital gains tax rate… which I updated my reporting to reflect.

For at least a year after that, people wrote to tell me I didn’t know what I was talking about. Colombia, they insisted, did not have a 10% capital gains tax rate.

Then there was the wealth tax…

The wealth tax expired one year… and then was reintroduced for another temporary period. Today, many people still insist that this country imposes an ongoing wealth tax.

It doesn’t… not right now… but that doesn’t mean it couldn’t again at some point in the future.

One other changing and confusing point to do with taxes in Colombia is whether or not a resident’s pension income is taxed.

For the record, pensions are taxed in this country… but only after a certain amount. In practice, few people earn enough pension income to have to worry about paying tax on it in Colombia.

How can you know who or what to believe when operating offshore?

Start by never taking any single source at his or her word (including me). Verify any piece of information with potential consequences for you with at least two or three unrelated sources. If you check with three sources and get three different answers to a question, find two or three more sources… and on and on.

Don’t make life-changing decisions until you (like our editors) have invested in a little fact checking.