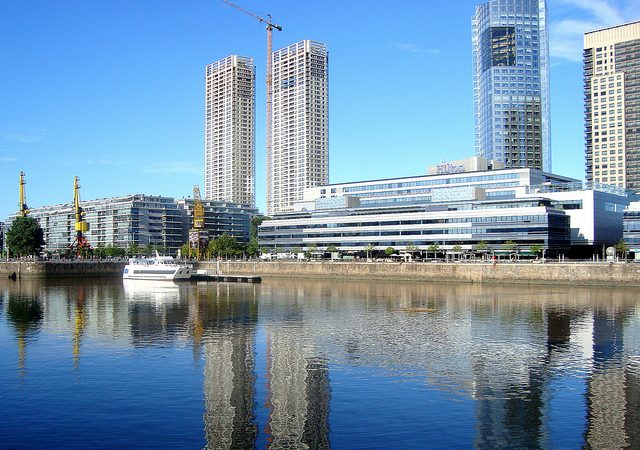 A colleague here in Mendoza, Argentina, where I’ve spent the weekend, has been talking about this country’s last financial crisis, in 2001, which started with the unpegging of the Argentine peso to the U.S. dollar.

“Those who didn’t have some money outside the country were devastated,” he explained. “But Argentines always have as much of their wealth outside their country as they can. We know to be diversified beyond our borders. Because we know from experience what the consequences can be when you’re not.”

Argentina is a country of crises, one after another. The Argentines seem to thrive on them. Maybe it’s a consequence of the big historical Italian influence. Maybe it’s some kind of national insecurity complex. Argentines are more likely to opt for plastic surgery and to see a therapist than most any other people on the planet, so the latter theory could have merit.

Whatever the reason for the perpetual political and economic drama that rules here, the result is an interesting place to spend time. Argentina is many things but never boring.

It’s in this context of perpetual chaos and flux that Argentinians have learned to keep as much of their wealth as possible outside their own country. They don’t know when the next crisis will hit…or what it will mean for them personally and day-to-day.

For example, following the December 2001 unpegging of the peso to the Greenback, Argentina farmers enjoyed a boon. Just as their and everyone else’s dollar deposits were converted, overnight, to pesos, so, too, were the farmers’ dollar loans. While dollar deposits becoming peso deposits overnight was a disaster and meant that those holding the deposits lost 75% of their value…the farmers’ dollar debt being converted to pesos was a windfall. It meant they owed but one-quarter as much as they had before!

As the debacle that followed the unpegging played out, real estate prices collapsed by as much as 75%. This window of opportunity at the bottom, though, lasted only about a month. By July 2002, prices had stabilized and were increasing. However, the pre-crash prices would not be seen again for several years. The years 2002 and 2003 were the time to be buying property in Argentina, especially in Buenos Aires…and I did. We bought an apartment in 2002 that we sold in 2008 when friends we’d invested with wanted out. We doubled our money (not including rental income earned along the way). I’ve got those profits ear-marked for another Buenos Aires investment when the next crisis hits.

Meanwhile, prices for productive land did not drop as dramatically in this country following its last crisis. Farmers’ debt was now in pesos, but their income for the commodities they were producing continued in dollars. The government took away much of the resulting benefit by taxing exports, but, generally, farmers fared well.

Until The Next Crisis Comes...

Now, Argentina is preparing for its next crisis. Inflation has been steady and high for the last seven or eight years. One expat friend with long experience in this country believes that actual inflation (as opposed to government-reported inflation) has doubled consumer prices every three to four of the past eight years. This would mean that a meal that cost US$5 in 2004 costs US$20 or more today. Fortunately, the peso has moved from about 3 pesos to the dollar to 4.6 to the dollar in that time, meaning that that US$5 meal is, in fact, about US$12 today. That’s not expensive, but it’s not cheap. In other words, Argentina is no longer the cheap destination it was from 2002 to 2004/2005.

Property prices, though, haven’t kept up with consumer prices, meaning you can find relative bargains. The Argentine colleague I mentioned above has invested over the past four years in a small vineyard project where the prices are extremely attractive. I’ll tell you more about it once I pin down all the details.

Through it all, Argentina remains one of my favorite countries in the world, and I’ve renewed my search for a small farm in this country. I see this as an important part of my big-picture diversification strategy for my family and want to have a target purchase in mind before the next crisis strikes. My Argentine friend predicts that will be in 2013.