Lief Simon On Why Portugal Is A Top Property Investment Market 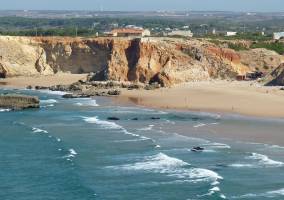 Arriving this week from the colonies to the point where explorers took off to discover them, Lief and I were met by big numbers of Old World tourists. This is peak season in Southern Europe, and Lisbon airport, when we passed through, was packed with holidaymakers, most from the British Isles.

Lisbon airport was crowded and also uber-modern, with technology that puts Newark, from whence we’d come, to shame. Passports are scanned and facial recognition shots are taken of arriving travelers using equipment I’d not encountered before. After passing my passport through the auto-scanner, I stepped forward to the next point in the queue and stood waiting, waiting… until Lief pointed out that I needed to look up so the auto-camera could see me clearly. Still, no photo… until I removed my sunglasses. As soon as I showed my face fully, the camera snapped and the gate opened for me to continue on.

We connected with our 30-minute flight from Lisbon to Faro without incident. Portugal has gotten very efficient at shuttling sun-seekers to her coast.

The drive on the motorway from Faro west to Carvoeiro, our ultimate destination, is unimpressive. But, as soon as the coastline comes into view, you remember why you’ve come. This is the view from the balcony of the hotel where we’re staying, and similar coastal snapshots are never far away. Here on Portugal’s Algarve, the seafood is fresh, the people are pleasant, the service is friendly, and the wine is affordable on every menu. What more could you ask of a summer holiday?

To keep ourselves from succumbing too soon to jet lag the afternoon we arrived, Lief and I wandered down to our hotel’s beach after we’d checked into our room. It’s what I’d call a keyhole beach—not a lot of sand but what sandy bit there is is framed by coral cliffs. We climbed the stairs up inside the coral formations to watch five young boys playing soccer in the surf and a fellow hotel guest in full wet gear who dove in just offshore with a spear gun. In fewer than five minutes, the guy had speared two fish! We wanted to wait around for him to return to shore to ask if he intended to deliver his catch to the chef for the dinner menu, but the shade of the ocean-view hotel bar beckoned. We retreated to watch the afternoon fade from under cover.

We talk about places where you could live or retire overseas without having to learn a new language. Most everyone you’d encounter in Panama City or Puerto Vallarta, we say, for example, speaks English well enough that you could get by in those places without speaking Spanish if you wanted.

That’s not the case in the Algarve. Here it’s not that you can get by without speaking Portuguese; it’s that there’s no reason to try. Everyone you meet everywhere speaks English. There must be exceptions, but we’ve yet to encounter one. Staff in the gas station, in the corner grocery, in restaurants where we’ve eaten, and every staff member at our hotel… they all speak English well enough to tease and joke with us. I practiced my “bom dia” and “obrigado” before arriving, but even those standards are unnecessary here (though appreciated, I’m sure).

You have the British to thank for this. Their long presence in this part of the world means that everyone here speaks the language of the queen and that tea is served always with milk.

Checking in at the Tivoli Hotel, we met two other guests, readers, it turns out, in town for this week’s Live and Invest in Portugal Conference.

“We’ve been traveling for more than two years,” they told us, “first in Central and South America and the Caribbean and now in Europe.

“We’ve been reading your blog, Kathleen, all along the way, since before we left the States,” they explained, “and we’ve been to all the places you recommend, checking them systematically off our list. We’ve been looking around Portugal for two weeks already and are excited for your conference this week. We think Portugal is for us.

“We liked Las Terrenas in the Dominican Republic, but we realized we don’t really like islands in general. They’re limiting. We liked Granada, Nicaragua, too, but, again, it’s small… limited.

Hard to argue with that point of view here in the Algarve, where the best of coastal Europe is a bona fide bargain.

Where To Look In Portugal

Low-rise Carvoeiro, where we’re based for this visit, is a destination for all ages. Families with young children play on the beach, older couples hold hands as they meander through the small town center, and young ladies take the sun topless, as is the custom in this part of the world. But for that last segment of the demographic, you could imagine this a Euro-Mayberry by the beach.

Albufeira to the east is this coast’s party town. Lagos to the west is a walled city with some of its original Roman walls and fort intact. I like history and old buildings, so, if I were looking for a place to live on this coast, Lagos would tempt me. In the center’s old-town heart, you can find aged apartments with tall, shuttered windows and classic-style moldings and other finishings. These are in limited supply, and property agents aren’t interested in talking about them. You’d need to seek them out on your own, on the ground. The reward would be a little piece of history in one of the most historically important regions of Europe and the world.

For, in the Middle Ages, this region was believed to be the end of the world. Specifically, the town of Sagres, a bit to the west, situated on the point of this wedge of earth, was highlighted on ancient maps as the Promonturium Sacrum… the end of the known world, beyond whose sheer cliffs lie only the unknowns of the ocean.

Six-hundred years ago, bold men from this cape conceived and constructed sailing vessels that, they hoped, would allow them to face the open Atlantic and navigate successfully toward the unknown. Henry the Navigator built a fortress here that is worth a look today.

All things considered, though, I agree with the property agent we spent time with yesterday afternoon. While I’m personally drawn to the centuries-old buildings of central Lagos and while other towns along this coast, including Sagres, are worth visiting, Carvoeiro is the most sensible choice for where to spend your time and money.

Specifically, Carvoeiro would be the place to buy an apartment for rental. Property prices are higher in Carvoeiro than in Lagos and other nearby towns, but rental prices and occupancy rates are higher, too. Peak season is June through September, and you should have no trouble keeping an apartment rented during those four months. One apartment we looked at, priced at 165,000 euros, would rent for 1,000 euros per month in season, meaning you could achieve a reasonable return renting those four months only. You could have use of the place the other eight months of the year yourself if you wanted.

Or you could continue to rent it out. We’ve been assured there’s rental demand here outside the summer season, thanks to the many golf courses, which attract golfers year-round.

“Lief, my husband and I were in the Algarve last fall, and it is quite lovely.

“I just watched your video regarding investing. I feel the need to point out that our finances were much less secure at the end of the Bush administration when the economy was on the verge of complete and total collapse. Thanks to the quick work of Obama’s team, my financial situation was rescued. Countries like France tax and spend whereas countries like Greece do not raise taxes. Food for thought.

“I’ll take the tax and spend countries, thank you.”

When governments spend more than they tax for decades, then you have a problem. I don’t see any way around the fundamental math.

The United States can’t tax its way out of trillions of debt, so they’ll eventually have to resort to other measures… including printing more money, which they already are…