Going Offshore: What’s The Point For Me? 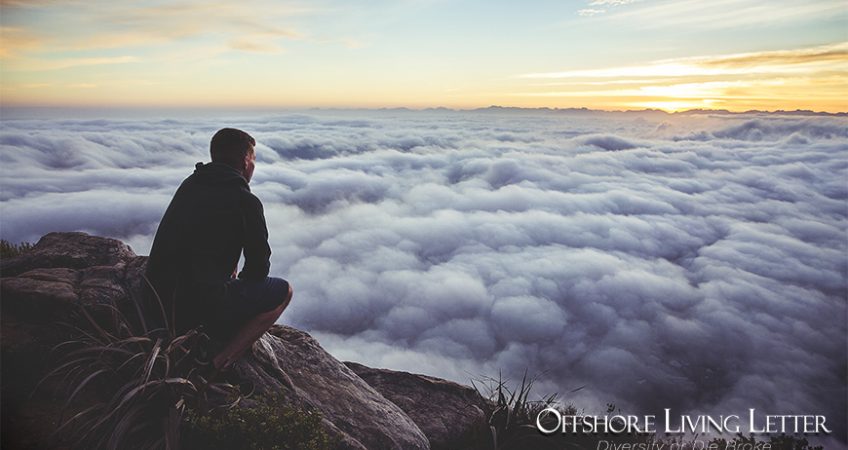 Before Going Offshore, Ask Yourself: What’s The Point For Me?

You need a plan for your future.

Everybody knows that, right?

The trouble is that making a plan for your future is a big, daunting idea.

I mean… where… how do you start?

You don’t want to get this wrong… but how can you know which is the best path to follow to reach your ultimate goals?

Trying to answer that question with confidence, especially in the context of diversifying your life offshore, can be paralyzing.

Do you need an offshore corporation… if so, where?

It’s taken me more than 20 years to get to the point of international diversification that I’ve been able to achieve for me and my family.

The path I took to get where I am wasn’t straight, and it probably wasn’t the “best” one either.

And it was never set in stone. My portfolio of flags planted has been and still is ever expanding… as new opportunities present themselves and as I set new goals.

It needn’t take you 20 years to create the diversified life you need and want.

I don’t know how long it should or will take, but I do know one thing…

You Need To Take Action To Get Started Right Now

The first step, before you even begin thinking about which flags you want to plant where, is to lay out your goals. Many people open a foreign bank account or set up an offshore entity before they’re clear in their own minds about what they want to achieve… and that’s completely counterproductive.

This shouldn’t be a random exercise.

Start by asking yourself: What’s the point—for me?

I tell a story about a lady, years ago, who approached me during a conference to ask what she should do with her offshore corporation.

At first I thought she was asking me how to sell her offshore business… so I began asking her questions about the business.

She stopped me to clarify. She had set up an offshore corporation in Panama a few years prior on a trip she’d made with a friend. She’d had the entity for three years by the time she asked me about it… and still she didn’t know what to do with it.

When I asked why she’d set it up in the first place… what was her original goal… she told me that she’d formed the company because a friend had told her she needed an offshore corporation.

After more discussion, I advised the lady to let the corporation go… just let it die.

She was upset about the money she’d wasted setting up and then maintaining the company for three years, but, after getting some idea of her situation, I couldn’t imagine her needing an offshore company for at least two or three more years… if ever.

The cost of setting up a new corporation can be about the same as the cost of two years of annual fees. It was simple math.

Unfortunately, I hear versions of that lady’s story every year.

The other thing people set up without any specific goal in mind is an offshore bank account.

Remember, for any go-offshore action you take or strategy you pursue, you need to have a good answer to the question: What’s the point for me?

Unlike most U.S. bank accounts, offshore bank accounts come with fees, sometimes—and increasingly—high fees. Setting up an offshore account, putting a few thousand dollars in it, and then just letting that money sit doesn’t make sense. It is just going to cost you monthly fees.

One simple goal could be to have some money outside your home jurisdiction for a rainy day. That’s a good idea. Just make sure that whatever amount you move into your offshore bank account is enough to offset whatever fees you’re going to be charged.

Bottom line, whatever you do, make it part of an overriding plan… a plan with an objective.

How do you imagine a plan and an objective?

It can be hard to do on your own but easier and more efficient with help.

Once a year, I bring my offshore infrastructure together in one room at one time with that agenda in mind—to help those in the room with us make a plan.

The program is predicated on education—both why and how to go offshore 101 education as well as detailed introductions to the best current options for diversifying offshore, flag by flag.

This year, I’m holding my Offshore Wealth Summit in June in Panama.

I’ve invited attorneys from Portugal and Panama to Colombia, the Dominican Republic, and elsewhere to discuss residency, citizenship, and structure options.

We’ll have U.S. attorneys in the room, too, to help connect the dots between your options and opportunities offshore and your life and obligations (particularly your ongoing tax obligations) in the United States.

Other experts in the room will include tax, currency, asset protection, and real estate investment professionals.

And I’ll be there, of course, to help you tie all the pieces of your plan together.

If you already have a plan, the professionals at the conference will be able to help you push that plan forward.

As I said, I’ve been at this for 20 years, and I’m still expanding and modifying my plan… and learning something new with every step.