Euro Is Down 6% Against The U.S. Dollar In May 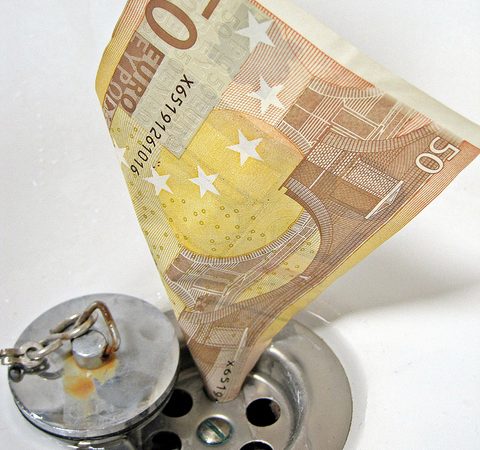 The euro has lost 6% against the U.S. dollar in the month of May and is rapidly approaching its most recent low (June 2010) of US$1.20. Make no mistake. It’s the euro losing value against the dollar, not the dollar gaining value. The financial crises in Greece, Spain, Ireland, and a growing number of other euro countries mean people would rather hold dollars. They’ve become the lesser of two evils.

The question everyone is asking is: How far will the euro drop? I don’t try to predict currency movements, especially over the long term.

That said, let’s take a look at some history.

At today’s rate of US$1.24, the euro has a lot of room to continue down before it reaches its all-time low. If the euro countries keep moving down the path they’re currently on (and there’s no reason to think they won’t), it’s very possible the euro could drop far enough to return to its historic bottom. That’d be another 30% of depreciation.

For most people, the euro/dollar exchange rate doesn’t mean much–unless maybe you take advantage of the current situation to plan a vacation to Europe this summer (I am). For the investor focused on diversification, though, this is a bigger opportunity.

Specifically, this is a good time to look at reallocating some of your assets…especially with real estate in some of these markets currently so heavily depreciated from recent highs.

Again, predicting currency movements is something I try to avoid. And, the truth is, even currency “experts” can’t consistently predict in which direction, when, or by how much exchange rates will move. I don’t see that as the point right now. The point today is that, given the current euro exchange rate, investing in euro-denominated real estate has become a more attractive idea than it’s been in some time. And, even if you’re concerned about getting into the market too early (before the euro hits bottom), you can take action now. Here’s how.

The first step is finding the investment property. I’d focus the search in euro-denominated markets where you can obtain local bank financing as a non-resident. Look for a property that could easily be rented out. You’re investing for currency and asset diversification but also for a yield. I’d recommend France, but Spain, Portugal, and Ireland are options to consider, as well.

If you’re not already actively paying attention to the market in any of these countries, your ramp-up time will give you a few months to see which way the euro moves from here. It could fall further before you buy. Or it could bounce back a bit, depending on news out of the ECB, Germany, or France. Don’t let that dissuade you. The big-picture objective is diversification into euro-based real estate.

The second step is obtaining a mortgage for the purchase. Non-residents can get mortgages in most West European countries if you can prove the income needed to make the payments. Banks will lend from 50% to 80% of the purchase price (or value if they decide the purchase price is inflated).

So you’d put 20% to 50% down at today’s better euro exchange rate and borrow the rest. This would allow you to get into the euro market at a decent exchange rate while hedging whatever the euro might do from here over both the short- and the long-term. If the euro drops further, you could send dollars to pay down or to pay off your mortgage balance. (Just make sure your bank will allow early repayment. Usually they do, but sometimes there is a one- or three-year timeframe during which early repayment triggers a penalty.)

If the euro gets stronger in the short-term, you have the rental income to make the mortgage payment. And long-term you have an asset and cash flow in another currency.

Currency Diversification EuroDollar Exchange Rate EuroProperty Investing
Share:
Offshore Living Letter ® 2022
Legal Sitemap Privacy Policy
* Type a keyword then press Enter
We use cookies to ensure that we give you the best experience on our website. If you continue to use this site, you're agreeing to our policies.Thanks, I Accept!Privacy policy