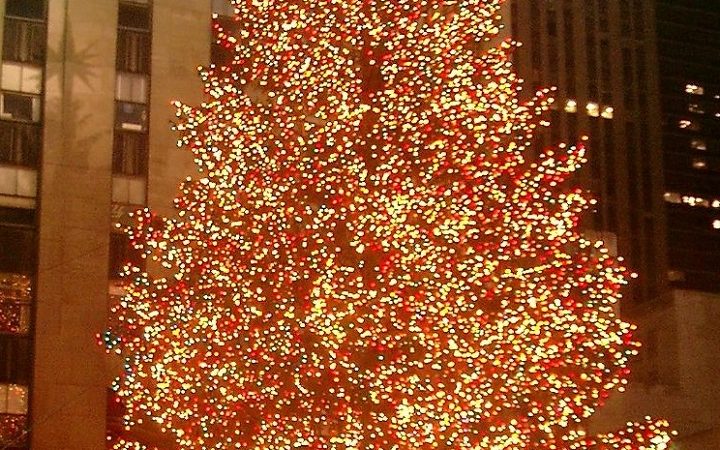 Our seven Christmases in Ireland, we could never bring ourselves to participate in one of Ireland’s quirkiest festive traditions, what the Irish refer to as the “Christmas Day swim.”

On Christmas morning, from beaches, piers, and coves around the country, people of all ages gather to immerse themselves in waters of around 50 degrees Fahrenheit (maximum).

“Swim” is a bit of a misnomer. There is no particular distance that you need to cover, nor any agreed-upon duration you must stay in the water. You simply join the crowd of people running toward and then into the water (cheered on by well-wrapped-up spectators), screaming as their bodies hit the ice-cold sea. A quick splash of the arms and legs, then back in to shore to dry off, wrap up, and enjoy a hot drink or a shot of whiskey.

Wetsuits have appeared on the scene in recent years, mostly among the kids, but it remains an unspoken rule among the hardy adults taking part: Traditional bathing suits only.

Our four Christmases in Paris were all about the lights. Each year, starting in November, Boulevard St. Germain, just a few blocks from our apartment in this city, is strung with tiny white lights. The trees and the building facades are covered with them. Each morning and again each evening as I’d walk Jackson, aged 4 through 8 at the time, to and from school, we’d linger at the intersection of Rue du Bac and Boulevard St. Germain as long as possible, looking up and down, up and down, slowly, working to fix that magical view in our memories. “It’s a fairy land,” 4-year-old Jack declared it one morning. I see it still.
Twinkling lights and decorated shop windows. This time of year, storefronts throughout Paris are draped with pine garland, and displays feature green trees flocked with white and trimmed with red and gold baubles. No one does shop windows like the French do shop windows, and no others compare with the shop windows of central Paris at Christmastime.

My fondest memory of Christmas in Panama, where we’ve been living for the past five years, is of our son’s annual Christmas pageant.

Jackson, now 15, attends Panama City’s French school, l’Ecole Paul Gauguin. Four years ago, this meant he went to school with about 75 other children. Today, Jack is part of a student body that numbers more than 800. I was surprised when we arrived to discover that Panama’s French school had 75 students, many, also surprising to me, Panamanian. Why would a Panamanian family, living in Panama City, choose to send their children to a French-language, French-curriculum school? I still don’t know the answer to that question, but today dozens more Panamanian families are opting for this approach to educating their kids.

Of course, all the students at Paul Gauguin aren’t Panamanian. Jack is one of the few Americans. In addition, there are kids from families that call themselves Spanish, Mexican, Colombian, Irish, English, German, Chinese, Japanese, Canadian, and, yes, French. The parents of these wandering youngsters are in Panama as entrepreneurs, like Lief and me, or because the international companies they work for have placed them here. And, again, their numbers have increased 10-fold while we’ve been part of the charming community they create.

Jack came to me earlier this month to tell me he needs a red Santa hat and a green polo shirt. Would I please find these things for him at the mall?

“Ah, for your Christmas pageant?” I asked, excitedly. “Great. When is it? Dad and I always really enjoy the show.”

“Parents of the older kids don’t really come to it, Mom,” Jackson responded. “Only the parents of the little kids come to watch. I just need you to get me the hat and the shirt.”

Our First Christmas In Panama

Our first year in Panama, Paul Gauguin’s Christmas pageant took place in the 300-year-old Teatro Anita Villalaz in the center of Casco Viejo’s Plaza de Francia. Even back then, when the student body was much smaller than it is today, it made for as eclectic a collection of small children as you might ever find. Jackson introduced us to his friends from all over the world, some have names I couldn’t pronounce even after Jackson repeated them for me three or four times. Finally, embarrassed for me, he gave up, suggesting that, if I have something to say to a particular child, he’d be happy to relay the message for me.

Some of these children, then and now, have lived in three or four other countries already, though they’ve only barely begun their little lives. Most speak Spanish and French; others also speak English, Italian, German, Japanese, Chinese… They switch among languages effortlessly and manage to communicate among themselves cheerfully and with far less misunderstanding than you might expect.

That first year, on stage in the grand old theater on the Plaza Francia, the young but worldly bunch from l’Ecole Paul Gauguin, Jackson among them, performed Christmas songs in Spanish, French, and English, including some we recognized and many we didn’t.

“Children in Palestine and children in Israel, children from the Americas and also from China, this day, let us think only of Christmas,” began one song in French.

At Jackson’s birthday party last month, I had a chance to speak with some of his classmates’ moms. Some have husbands working with the UN and other international organizations who have been posted in Panama for a year or two. Others are here for work related to various of this country’s many infrastructure projects. They and their children have migrated to Panama from Mexico City or Caracas, Buenos Aires or Santiago, Paris or Madrid…

Lief and I worry sometimes about the life Jackson is living. Born in Ireland, he’s since lived (and gone to school) in Paris…and now Panama City. He’s an American by birth though his only experiences of the United States are his annual visits to see his grandmother and cousins in Baltimore. If you were to ask him, Jack would tell you that he’s Irish, with the second passport to prove it. I wouldn’t call him American or Irish or French either, though the parents of his friends are shocked always to discover that Jackson’s parents are American, not French. “But Jackson is French, is he not?” they ask us, trying to make sense of Jack’s perfect Parisian French in the context of our American English.

“No, he’s American, like us,” I explain, not sure how else to describe him.

Jackson is a little guy without a country but embracing the world. And, at the French school in Panama City, he’s found about 800 other little guys and girls just like him who, one evening each year, join together to fill the tropical night with the sound of Christmas songs from around the world.

We’ll spend Christmas Day this year with my family in Baltimore, my home town. I appreciate the chance to return to the place from which I launched my adventures overseas some 17 years ago at this time of year, the season for remembering and for taking stock. Where will 2015 lead us? I can’t wait to find out.

On behalf of the entire far-flung staff of Live and Invest Overseas, please accept our warm and heartfelt wishes for a Merry Christmas, wherever you find yourself enjoying it this year, and our sincere hope that 2015 is the year your far-flung dreams of adventure overseas begin to come true.

All the best from our family to yours. We so appreciate your coming along with us for this ride.

“Lief, does buying property under an LLC count toward getting the residency visa programs in Panama?”

Unfortunately, it does not. You have to title a property in your personal name to be able to use that property to qualify for Panama’s “Specific Countries” visa.